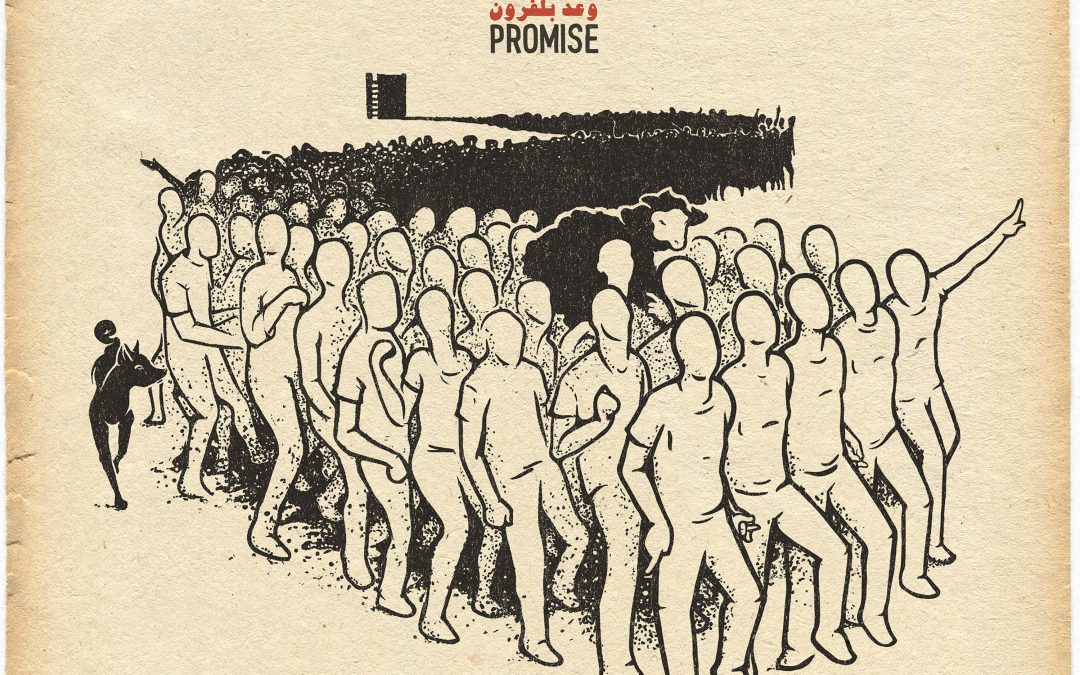 To be released on February 2nd via Cooking Vinyl

47SOUL – the Arab electronic hip-hop supergroup with members from Palestine and Jordan– will release their full-length debut Balfron Promise on February 2, 2019.

For the last two years the band have been living in London, and were temporarily residing in Balfron Tower-the setting of music videos by the likes of Oasis, The Verve and Wiley. Balfron Tower landlords opened several of its unused flats to artists on a temporary basis while evicting its long-standing tenants, having been bought by luxury property developer Londonewcastle.

While inevitable, the experience of watching their neighbors being removed from somewhere they thought of as home by bigger, more powerful, wealthier forces was only too familiar to the artists from Palestine and Jordan, a sentiment that has fuelled the explosive album.

The title Balfron Promise is an intentional nod to the Balfour Declaration – the centenary of which has just passed. The songs expose the similarities between parts of the world we think of as distant, war-torn lands, and the culture and class wars happening on our own doorstep. It explores the idea that perhaps gentrification and occupation are not as different as we think.

47SOUL have become renowned for inventing their own genre Shamstep (also the name of their debut EP), which fuses hip-hop and pop lyrics in English and Arabic. The electronic creation, featuring elements of Arab roots music have been kicked up a gear on Balfron Promise, with cinematic soundscapes and menacing rock undertones creating an extra atmospheric edge.

The quartet have gained a cult following from gigs around the world, including at the likes of Glastonbury and WOMAD in the UK. Their distinctive hooks and powerful political lyrics resonate with their fans with the YouTube music video for their debut single Intro to Shamstep currently sitting on 5.4 million views.

They also have a formidable reputation as a live act built on their energetic and intoxicatingly otherworldly live shows. This is demonstrated by their most recent sold-out live teaser performance of their new album at London’s Village Underground.

Beyond their musical influence, 47SOUL are renowned as a voice on social issues – the band’s very name is an allusion to the occupation of Palestine. Their lyrics often tell stories of oppression and the efforts of normal people to combat it, not only in the Middle East, but around the world.

Balfron Promise will be released via Cooking Vinyl whose founder Martin Goldschmidt is also a co-founder of the Palestine Music Expo, which aims to revolutionize the music scene in 47SOUL’s homeland.

MORE ABOUT THE ALBUM:

Musically and lyrically, Balfron Promise is a product of 47SOUL’s three-year residency in London, a profoundly unique experience for the four members and their work. The album and themes are inspired both by modern-day London and the 100 year-old politics still influencing 47SOUL’s story to this day. Socially topical and lyrically astute, Balfron Promise holds one promise, that their future will be written by no one but themselves.

47SOUL is an Electro Arabic Dabke (Shamstep) band formed in Amman Jordan in 2013. The members are rooted in Bilad Al-Sham, spanning the divides from Amman to the Galilee to Ramallah and the rest of the Palestinian Diaspora. This new sound of 47SOUL has rapidly amassed fans in the Arab World, Europe, and around the globe by blasting the electric Arabic Dabke sound through alternative and street music scenes. On top of the beats that have been pumping in the Arab World for centuries, 47SOUL hypes it up with analog synthesizers, hypnotic guitar lines, group vocals, and melodic verses from the bands’ singers. Every show ends in relentless dance and trance from all audiences involved. Their lyrics, mixing Arabic and English, call to celebrate and advance the struggle for freedom and equality, inside Bilad Al Sham and throughout the world.