NEW ALBUM BY A HAWK AND A HACKSAW: YOU HAVE ALREADY GONE TO THE OTHER WORLD / MUSIC INSPIRED BY PARADJANOV’S SHADOWS OF FORGOTTON ANCESTORS, PRODUCED BY DEERHOOF’S JOHN DIETERICH, TO BE RELEASED APRIL 2 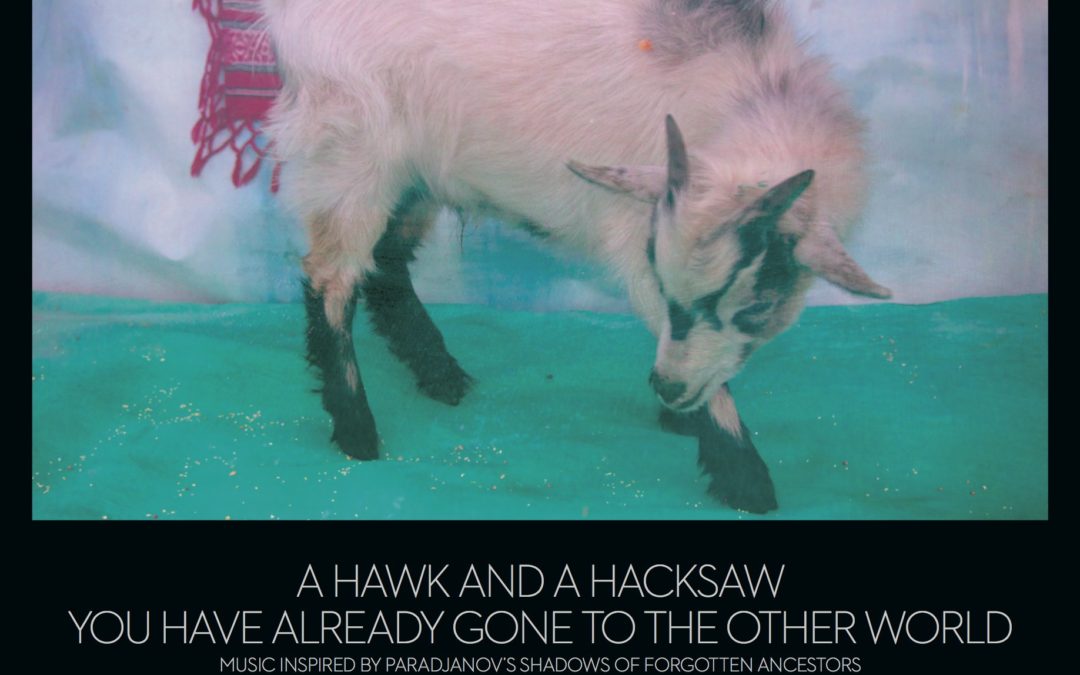 Glorious madness and melody, played not only with skill, but with real passion. – All Music Guide

A Hawk and A Hacksaw, the duo of Jeremy Barnes and Heather Trost, known for performing traditional and original music steeped in Eastern European folk traditions, have confirmed the release of their sixth album You Have Already Gone To The Other World / Music Inspired By Paradjanov’s Shadows of Forgotten Ancestors on April 2 via their own label L.M. Dupli-cation. The sixteen tracks on the double album feature seven originals along with nine Ukrainian, Hungarian and Romanian traditional songs re-imagined and arranged with inspiration taken from the legendary 1964 film Shadows of Forgotten Ancestors by Russian filmmaker Sergey Paradjanov.

Taking their cues from the surreal folk magic of Forgotten Ancestors, Barnes (of Neutral Milk Hotel) and Trost (who lends vocals and violin on Josephine Foster’s latest album) began composing new music to perform along with the film and, in 2012, took the project on tour, accompanying the movie live in cinemas and theatres internationally. The new album is the product of those tours and the evolution of the music into something that can stand on its own – new compositions and traditional folk tunes which can not only accompany the film but work to create a new blend of music and prerecorded sound that comments on, and sometimes overtakes, the original soundtrack and dialogue.

Produced by John Dieterich of Deerhoof, this is the first AHAAH album for some time to feature only its two primary members (with the exception of two tracks where Dietrich lends guitar) but the instrumentation is not minimal. Dieterich’s sense of musical experimentation has driven AHAAH into new territories of folk psychedelia that often explodes with rich ornamentation. It’s also the band’s most dynamic album since they began their Eastern European adventure, with the thundering percussion and dramatic arcs of violin on the title track being counterpointed by majestic solo pieces for Persian Santur (“Where No Horse Neighs, And No Crow Flies”), and piano (“The Snow in Kryvorivnya”), stately organ-led processionals (“O Lord, Saint George, Bewitch Ivan, Make Him Mine”) and original sound and melodies from the film woven throughout.

U.S. tour dates to be announced.

Track list for You Have Already Gone To the Other World:
1. Open It, Rose (Hungary)
2. You Have Already Gone To The Other World
3. Witch’s Theme
4. Wedding Theme (Ukraine)
5. Dance Melodies From Bihor County (Romania)
6. Hora Pa Bataie (Romania)
7. Nyisd Ki Rózsám (Hungary)
8. Where No Horse Neighs, And No Crow Flies
9. Învârtîta Din Blaj (Romania)
10. Horses of Fire Rachenitsa
11. Bury Me In The Clothes I Was Married In…
12. Marikam, Marikam (Hungary)
13. The Snow In Kryvorivnya
14. O Lord, Saint George, Bewitch Ivan, Make Him Mine
15. Ivan and Marichka/The Sorcerer
16. On The River Cheremosh (Ukraine)