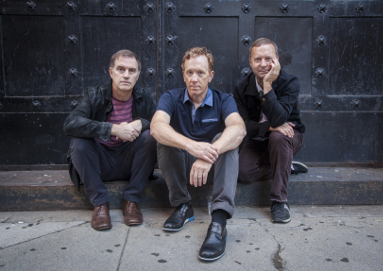 Boston-based indie faves Buffalo Tom, having recently wrapped an acclaimed run of sold out U.S. and U.K. shows marking the 25th anniversary of their alt-rock masterpiece Let Me Come Over, have confirmed their first new album in six years, Quiet and Peace, due March 2, 2018 via Scrawny/Schoolkids Records.

The compelling 11-song set finds the trio—singer-guitarist Bill Janovitz, bassist-vocalist Chris Colbourn and drummer Tom Maginnis—simultaneously mining their best-known sonic elements while breaking new ground on emotionally resonant new tunes such as “All Be Gone,” “Overtime,” “Roman Cars,” “Freckles” and “CatVMouse.” Full of nostalgic and dusky imagery, much of Quiet And Peace emerges from New England’s less visited darker corners, offering a sort-of poetic travelogue of faded colors and woods illuminated in the light of the seaside.

“For this record, I wanted to show Chris and Tom Dave’s Woolly Mammoth Studios in Waltham, MA,” says Janovitz. “Dave is a local legend—founding the beloved Neighborhoods when he was a teenager and going on to play in the Replacements and Paul Westerberg’s solo band—he is a tremendously kind and gifted guy.” Janovitz continues,” Woolly reminds me so much of what I loved about really relaxed, vibey studios like the early iterations of Fort Apache in Boston, and places like Dreamland Studio up in Woodstock. Those rooms were responsible for three of our first four records, as well as dozens of other projects. You rarely felt like you were in a pro recording studio watching the clock. And Woolly Mammoth, like the Fort, is filled with an enviable, much-Instagrammed collection of vintage guitars, amps, and other gear.”

In addition to guitars, Quiet and Peace makes striking use of keyboards and synthesizers, as well as the voices of several female backing vocalists, including local heroines Jennifer D’Angora, Andrea Gillis and Erica Mantone, as well as Janovitz’s daughter Lucy, who adds her voice to the band’s poignant reading of the Simon and Garfunkel chestnut “The Only Living Boy in New York” and Sarah Jessop who sings on “High the Hemlock Grows.”

“We definitely tried some different things on this album,” says Janovitz. “But at the same time, I think that these are some of the most Buffalo Tom songs I’ve ever written. They’re little snapshots, and glimpses of people in my life, that hopefully have a universal appeal. I think our songs are a little more grounded and less opaque now than they used to be. The big difference is in the lyrical content. I would never have even sung from another character’s perspective when I was in my 20s. But I do it a lot now.”

“The most exciting songs for us at this point are the ones that break the Buffalo Tom mold somewhat,” Maginnis notes. “I like the ones that don’t immediately fall into our default mode of playing together, or that that allow us to explore some new little sonic territory or songwriting dimension. I find this album to be more subtle, with some finer textures and a bit more finesse, than what we’ve done before.”

“Billy has some grand slam lyrical moments on these songs, mastering that fine line between storytelling and poetry, as much as you can in a three-chord rock song,” adds Colbourn. “For me, they’re impressionistic, funny and sometimes sinister, set in the dark woods and seaside of the ever-returning New England autumn that Buffalo Tom songs seem to live in.”

“One of the more notable things on this record is how many songs Chris is singing on,” Janovitz says, adding, “We did a lot of collaborating on the music, bringing in the skeletons of the songs and hammering out the arrangements. Chris definitely brought a lot to the table this time, although he’s always been a strong voice in the band. Chris and I still primarily write separately and bring songs to each other, but it used to be a much more painful process to go through.”

“We formed as friends but became brothers, and we all sort of grew into this relationship,” observes Janovitz. “When we started, we were definitely a working-class band. If we weren’t working, we weren’t making a living, so we were always going off on another tour or making another record. You get into these habits and it becomes a self-fulfilling cycle.”

Buffalo Tom’s 1998 album Smitten preceded an almost decade-long break from recording, during which the band members raised families and occasionally convened for live shows. Buffalo Tom was back in action in 2007 with a new album, Three Easy Pieces, which was followed in 2011 by Skins, the band’s first for its own Scrawny Records label.

“Since we started recording again in ’07, it generally takes us about five years to make an album now,” explains Janovitz. “We keep playing together and we keep writing these songs that we want to record, but we take things easier now. It’s just what seems to make sense for us nowadays; for us, three records in the last fifteen years is reflective of our kids being born and growing up. We’re in an enviable position, in that people still pay attention to us and will still come and see us. But we can also put that all aside for awhile and get back to our regular lives.”

“We’re pretty lucky to have such loyal fans,” says Maginnis, “but I guess it’s not totally luck, as we worked pretty hard in the early days to play a lot of secondary markets and colleges and out-of-the-way cities across Europe. And of course the songs have a lot to do with it too. We’ve had our ups and downs over the years, but we’re in a great place now, because now we can just do this when we want. When the feeling hits us, it’s fairly easy to fire up the old BT machine for a stretch and then let it go back to sleep for a while.”