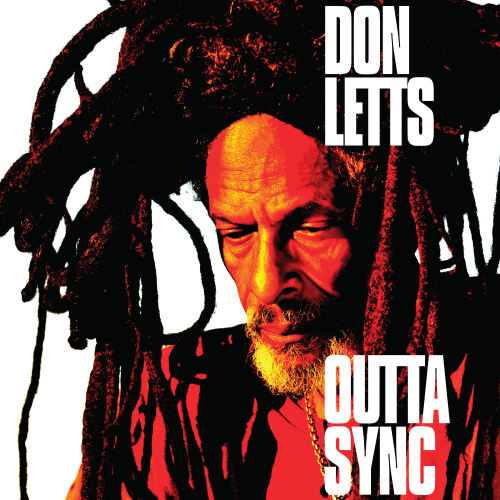 THE FIRST SONG AND TITLE TRACK FROM HIS DEBUT ALBUM
WHICH FOLLOWS ON APRIL 28TH, 2023 – PRE-ORDER HERE

From working with the likes of The Clash and Bob Marley to colliding genres with Big Audio Dynamite, still presenting his own radio show on BBC 6Music, winning a Grammy and receiving an honorary doctorate for his contribution to culture Don Letts appears to have done it all. Indeed along with the release of his best selling autobiography ‘There and Black Again’ last year and ‘Rebel Dread’ a film documenting his life released this year you’d be forgiven for thinking he had. But there’s one thing the 66-year old polymath hasn’t done… until now.

Today Don Letts shares ‘Outta Sync’, his debut track as a solo artist and the first taste of his debut album, also titled ‘Outta Sync’, which was produced by Gaudi and will be released on April 28th, 2023.

Set to follow the single in Spring 2023 it’s a heady cocktail of dubbed out bass heavy rhythms, island vibes n’ spoken word juxtaposed with melodic hooks and harmonies. The album is exactly what you’d anticipate a Don Letts project to sound like. ‘Outta Sync’ the title track is also notable as one of a few songs that can introduce such a storied life within a single verse: “Now, because of my duality, raised on pop and bass, didn’t really bother me, ’cause it’s all about the taste, I’m the vinyl generation, and that’s how I got my start, combining clothes and music, and I turned it into art.” And that’s just the introduction! Don goes on to reflect upon the changing world around him and his own shifting perceptions.

Ironically he hadn’t really intended to make music of his own. But then lockdown hit and his old friend, producer extraordinaire and Killing Joke bassist Youth encouraged him to give it a go, even sending him some bass lines to work with, yet Don wasn’t entirely convinced. That changed when he worked in the studio with dub producer Gaudi, another long time friend of Don known for his work with Steel Pulse, Lee “Scratch” Perry and Horace Andy to name but a few. The pair produced a remake of Big Audio Dynamite’s ‘Sightsee MC’ for the dub-inspired post-punk band Megative. They then collaborated on a dub remix of B.A.D’s classic ‘E=MC2’ for 2021’s LateNightTales compilation ‘Version Excursion’.

Don and Gaudi sonically clicked and ended up working together in Gaudi’s studio for nine months, three days a week, navigating both lockdown and Don’s arkestral vision. The result was Letts’ debut solo album, which is set to emerge next year, produced and co-written by Gaudi.

Featuring eleven mostly self-written tracks, ‘Outta Sync’ reflects his myriad tastes and interests, as well as his unique worldview. It also highlights an intriguing array of guests: the legendary Terry Hall of The Specials, The Flaming Lips’ Wayne Coyne makes an appearance, as does lovers rock queen Hollie Cook. Don co-wrote the song ‘Situationist’ with Zoe Devlin Love, previously of Alabama 3. Keeping it in the family is Don’s daughter Honor, who sings on the sitar-studded electronic groove ‘Civilization’. Collectively it’s a snapshot of who Don Letts really is in the here and now. Letts says, “for better or worse this is me, although I ain’t saying I’ve got it down, as the lyrics in the single’s chorus readily acknowledges. Ultimately the album’s a soundtrack to my mind with some cool bass lines, mirroring the sum total of my cultural journey and reflecting the duality of my existence, which is Black and British.”

The ‘Outta Sync’ album is now available to pre-order or pre-save HERE. In addition to its digital and streaming formats, it will also be released on CD, standard black vinyl, and a limited edition green vinyl which is available from select independent stores and Don Letts’ official webstore. The webstore also offers exclusive signed formats and album bundles.