DR. JOHN GOES BACK TO THE SOURCE WITH SKE-DAT-DE-DAT…THE SPIRIT OF SATCH 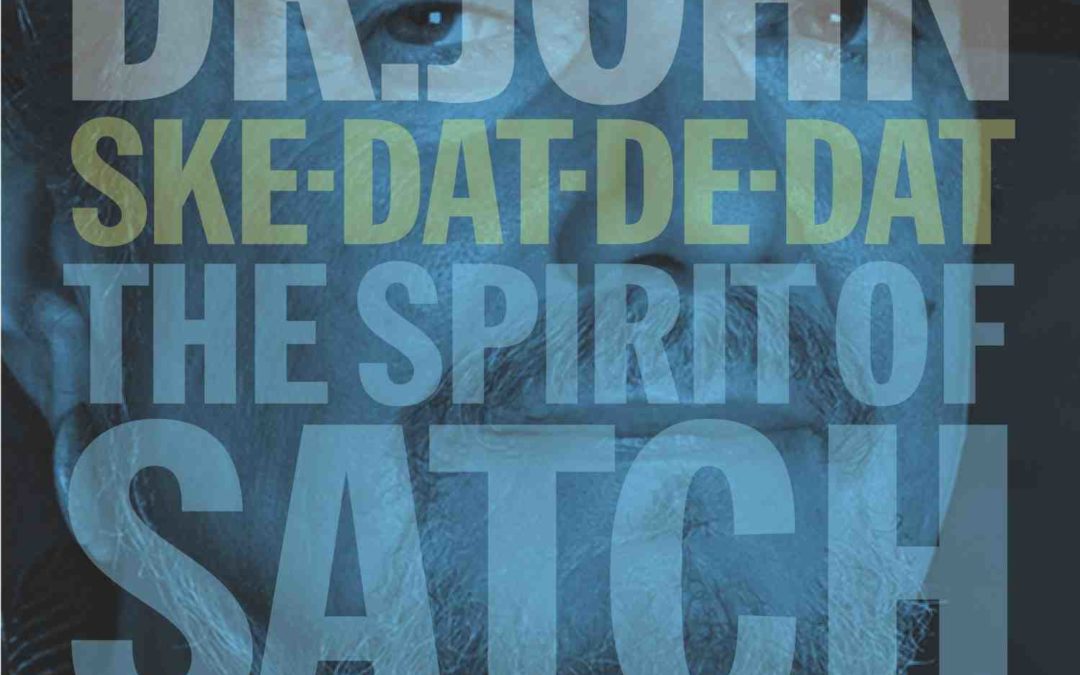 So it’s fitting that Dr. John’s August 19, 2014 debut on Concord Records, Ske-Dat-De-Dat…The Spirit Of Satch, pays heartfelt tribute to another larger-than-life New Orleans legend: the seminal trumpeter and vocalist Louis “Satchmo” Armstrong, whose musical innovations created the template for 20th-century jazz, and whose playful attitude and life-embracing spirit made him a beloved figure whose worldwide appeal transcended music.

“He’s the most famous guy that ever came out of my neighborhood,” notes Dr. John. “He became a legend all over, for his trumpet playin’ and everything else, and he was the United States’ ambassador to the world.”

Ske-Dat-De-Dat…The Spirit Of Satch honors Armstrong’s musical genius as well as his effervescent personality with 13 quintessential numbers drawn from various phases of Armstrong’s five-decade career, with Dr. John joined by a stellar supporting cast that manages to update the material while maintaining the music’s timeless emotional appeal.

The subtitle The Spirit Of Satch is particularly appropriate given the album’s birth cycle, which Dr. John says was set into motion when the late Armstrong—whom he’d only met once during his lifetime, in the office of their mutual manager Joe Glaser—came to him in a dream.

“Louis’ spirit came to me and told me to do something, that’s how this whole thing started,” says Dr. John, who’s previously released tribute albums to musical giants Duke Ellington and Johnny Mercer. “Louis told me, ‘Take my music and do it your way.’ It was the most unexpectable thing in the world to me, to have Louis’ spirit show up like that, but he gave me a concept of where to roll with it that was spiritually correct. That made me feel very open to try some different things, because I felt was that his spirit had ok’d this record.”

Prior to making the album, Dr. John honored Satchmo on stage, presenting rapturously received tribute concerts, dubbed “Props to Pops,” at New York’s Brooklyn Academy of Music in March 2012 and at the Hollywood Bowl in July 2013.

In addition to Dr. John’s trademark vocals and piano, and backup from some of New Orleans’ finest musicians, Ske-Dat-De-Dat…The Spirit Of Satch features a stellar assortment of guest singers and players. Bonnie Raitt shares the spotlight on a swinging reading of “I’ve Got the World on a String,” Ledisi and the McCrary Sisters lend gospel authority to “Nobody Knows the Trouble I’ve Seen,” Anthony Hamilton is featured on a mournful “Sometimes I Feel Like a Motherless Child,” Shemekia Copeland trades verses with Dr. John on a playful reworking on “Sweet Hunk O’ Trash,” and the Blind Boys of Alabama lend their powerful voices to “What a Wonderful World” and “Wrap Your Troubles in Dreams.”

Since Ske-Dat-De-Dat…The Spirit Of Satch is a tribute to the man who popularized the trumpet for a worldwide audience, it’s fitting that the project should feature some of today’s greatest trumpeters, namely Nicholas Payton (on “What a Wonderful World” and “Gut Bucket Blues”), Terence Blanchard (“Mack the Knife,” “Wrap Your Troubles in Dreams”), Arturo Sandoval (“Tight Like This,” “Memories of You”), Wendell Brunious (“Thats My Home”) and James Andrews (“Dippermouth Blues”), along with New Orleans’ legendary horn ensemble the Dirty Dozen Brass Band (“When You’re Smiling”).

“The whole thing felt pretty special, and I desitively was in a different zone for this record,” says Dr. John, who co-produced the album with his longtime trombonist Sarah Morrow, who also arranged the album. “I wanted to pull together some of his hits and some of the songs he wasn’t as well known for, and make them feel fresh and different. Sarah wrote some slammin’ charts that kept everything spacious and hip. And everybody played and sang great, and gave it their own spirit.”

Ske-Dat-De-Dat…The Spirit Of Satch is the latest achievement in a singular musical history that stretches back to the 1950s, when Dr. John—then still known by his given name, Mac Rebennack—emerged as an in-demand producer, guitarist, pianist and songwriter on New Orleans’ studio scene, working for such local labels as Ace, Ron and Ric, collaborating with the likes of James Booker, Earl King, Professor Longhair, Art Neville and Frankie Ford, and scoring the regional solo hit “Storm Warning.”

n the early ’60s, he relocated to Los Angeles, where he played on countless sessions before debuting his flamboyant new musical persona, “Dr. John, The Night Tripper,” with his first solo album, 1968’s Gris-Gris, which introduced the world to his uniquely eclectic voodoo-funk. In the years since, he has remained a distinctly prolific and powerful force, releasing more than 30 albums of his own while collaborating with a broad array of acts including the Rolling Stones, Sonny and Cher, Van Morrison, Aretha Franklin, Gregg Allman, Mike Bloomfield, Levon Helm, Ringo Starr, Rickie Lee Jones, B.B. King and Christina Aguilera. He also performed in such films as The Last Waltz and Blues Brothers 2000, and pursued a successful two-decade songwriting partnership with legendary tunesmith Doc Pomus.

Dr. John was inducted into the Rock and Roll Hall of Fame in 2011, and won the most recent of his six GRAMMY® Awards in 2013 when Locked Down was voted that year’s Best Blues Album.