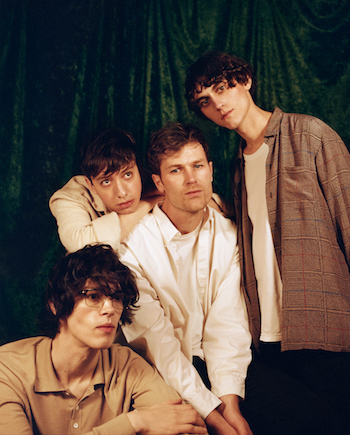 This is an album that feels like a deep inhale and an even longer exhale, a beautiful return that sees the band feeling more comfortable in their own skin than ever before.

A record that places Gengahr in a realm of truly special British bands.

Gengahr have unveiled ‘Burning Air, a brand new cut from their long awaited and highly anticipated new album released 9th March 2018 on Transgressive Records via Beats 1. You can listen to the track here.

Existing within a record that explores complex relationships and celebrates human flaws, ‘Burning Air’ finds the band at their most immediate, a three minute earworm that navigates honesty and moral principles in the modern world and sonically takes its cues from the likes of Dinosaur Jr, Pixies, and Tame Impala.

“‘Burning Air’ is a song that screams for integrity. Spits at social climbing, snarls at fairness and champions authenticity and hard work. Sarcastic and truthful in equal measure, it aims to smash through the glass ceiling above us all and cover us in the shard of other peoples insincerity.”

It continues an exciting return for Gengahr, with latest single ‘Before Sunrise’ currently on regular rotation at BBC Radio 1 and playlisted at 6Music, and exceptional comeback tracks ‘Carrion’ and ‘Mallory’—both of which offered a compelling insight into the world the band have created with Where Wildness Grows—championed by the teams at Spotify, Apple Music, Radio X, Radio 1 and BBC 6 Music—where ‘Carrion’ reached the A-list.

Gengahr have also shared full details of their upcoming Gengahr and Friends exhibition. Taking place at Hackney’s A Side / B Side Gallery from March 14th-20th the event will feature visual art from the band’s Hugh Schulte alongside work from Alt-J, Mystery Jets, Marika Hackman, Slaves, Toothless and Puppy.

Furthermore, having completed a tour in Europe supporting Jungle at the end of last year and their own intimate headline show at Omeara—plus a wall-bursting performance at their local Sake Bar for 50 die-hard fans—the band are set to embark on their own upcoming UK and European headline dates—including a milestone show at London’s Koko.

US TOUR DATES TO COME

Where Wildness Grows was recorded in London during summer 2017 by producer Neil Comber (Glass Animals, M.I.A, Songhoy Blues) and follows their much-acclaimed debut, A Dream Outside.

Where Wildness Grows will be available on CD, LP, limited edition cassette, and digital.

First orders of the record will receive a Gengahr seed packet, allowing them to grow in time for the album release. Pre-order the album at the band’s store and receive an instant grat of ‘Carrion’ and ‘Mallory’.

Gengahr formed at school in North London in 2013. Their debut album, A Dream Outside saw them secure multiple playlists across BBC Radio 1, BBC 6 Music and Radio X, pick up a number of dazzling reviews and play numerous stunning shows alongside the likes of Wolf Alice and Alt-J and play to packed tents at both the Glastonbury and Reading & Leeds festivals.