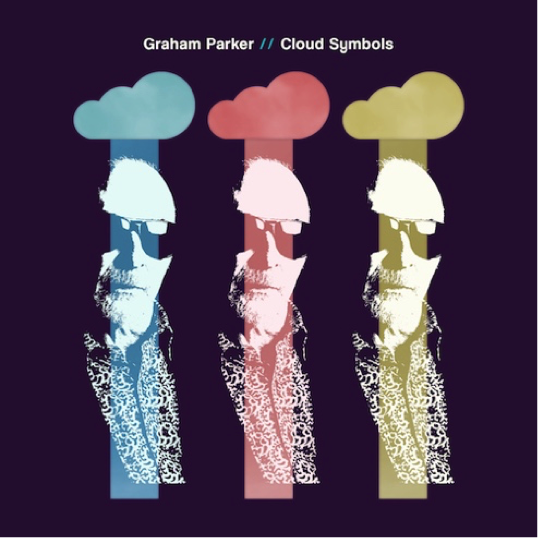 Cloud Symbols Out September 28 Via 100% Records

The inimitable Graham Parker is back with a new album entitled Cloud Symbols released on September 28 via 100% Records. Available on CD and ‘Hot Pink’ coloured vinyl, there will also be available a limited edition of signed copies. The first tracks from Cloud Symbols, “Every Saturday Nite” and “Dreamin” are out now.

With his Rumour packed away, Graham enlists a new gang, The Goldtops, on this new record (who, incidentally feature former Rumour member Martin Belmont).

WHILST ON A U.K. duo tour with Brinsley Schwarz in 2016, I got an email from Judd Apatow asking if I had any spare songs that might be considered for “one of” his new TV shows, as he put it.  I presumed that meant something previously recorded with a band but not released, so I said I didn’t. But Brinsley and I had three days off and I returned to London where it occurred to me that of a bunch of tunes I’d been working on, one song, “Love Comes,” might be of interest, and I thought it was finished enough to send him. I stuck the iPhone on the counter up against the kitchen tiles (which produced a nice kitchen tile slapback effect) and recorded it, voice and acoustic guitar only.  Judd loved it and asked how I would record it. I bluffed some kind of vague answer then promptly forgot about it!

A month or so later, Judd emailed me asking “Where’s my song?!” Oops, I better get busy quick. “Love Comes” screamed Martin Belmon ton electric guitar to me, backed by brushes, bass, keyboards and maybe a clarinet solo (which turned out to be a melodica solo by Geraint Watkins).  After describing the treatment I wanted to Martin, I asked him to recommend the right people for the job.  He came up with Simon Edwards on bass and Roy Dodds on drums. He also mentioned Neil Brockbank, an engineer/producer I’d met a few times and who has worked on many recent Nick Lowe records. His studio was now located in fabulous Tooting Bec, south London.  Not exactly the upscale neighbourhood of RAK’s St John’s Wood, a convenient walk up the road from me, where we did the last Rumour album, Mystery Glue, but suitably cheaper. I’d been thinking of Neil for a while and thought he’d be perfect to co-produce the kind of tunes I was now working on, and Martin’s recommendation sealed it for me.

We did a day in the studio and came out with one of the sweetest tracks I’ve ever cut, and by the time Neil had mixed it, I knew I’d got exactly the sound I needed for more recordings. “Love Comes” appeared on Judd Apatow’s HBO show Crashing and by the time I was back into the studio with the same band, I’d become very inspired by the next four songs I had ready to go (soon after recording, one of those songs, “Dreamin” was used by Judd for his show Loveon Netflix). After we’d recorded those tunes I listened to the rough mixes and continued writing songs that I thought would hang together as a conceptually consistent album, and then left it at that, to be continued after a four month spell in America. It was there that I got a terrible email from Martin telling me the sad news that Neil Brockbank had died suddenly of cancer.

I had not known Neil for long but he was not hard to like being with, from both a working relationship point of view and a damn good bloke to hang out with.  It was such a great loss and hit me hard, and those people who had known and worked with him for much longer than our brief association must have been devastated. I was so looking forward to getting back in the studio with Neil and the same personnel. One of those personnel was his assistant, a young American fellow named Tuck Nelson, who lives in London.  He was in the USA working not long after Neil’s death, and I made it a point to get together and have a chat with him.  Luckily, Tuck felt the same as I did: let’s get back into Goldtop studio as soon as possible and finish what we’d started, in Neil’s honour as much as anything.

Cloud Symbols is dedicated to Neil.  It’s no accident that we continued to try to create what Neil had such a big hand in. The first track finished was “Love Comes”and I thought it fitting to end the album with it, as the sound of that track is what Tuck and I did our best to echo throughout the record, even though we both agreed we couldn’t quite match Neil’s brilliant touch at capturing this kind of singer/songwriter music, of which Neil was specialist, but we gave it our all anyway.

The end result captures exactlythe kind of music I should be making today.  There’s a few heavyweight emotional tracks it’s true, both “Maida Hill”and “Is The Sun Out Anywhere”being prime examples, and “Every Saturday Nite”is only thinly disguised as a jolly pop song by dint of its uplifting chorus groove, but the main thrust of the album is concerned with my signature swing and lyrical playfulness that goes all the way back to “White Honey”and “Lady Doctor,”from “Howlin’ Wind.”  And there’s six songs with the RumourBrass on! As stated earlier, Martin Belmont was the musical lynchpin and his suggestion of the basic rhythm section – Simon Edwards on bass and Roy Dodds on drums, was perfect.  Roy’s drum kit seems to grow out of my acoustic guitar, Simon’s bass is endlessly inventive and Martin’s guitar work is tone perfect within every song. And with Geraint Watkins on keyboards we have a delightful mix of quirkiness and sweet country/soul riffs caressing every track. What a unique musician he is!

And in keeping with my current recording style that goes back to The Mona Lisa’s Sister, the vocals you hear are all live, played along with the acoustic guitar, not one single vocal drop-in took place.

I’m very proud of this record, no question. And if your hips aren’t swinging two bars into “Girl In Need,” you might want to seek medical advice.

Graham and The Goldtops head out on a short UK tour at these places:

Graham Parker isone of the most successful singer/songwriters to emerge from the UK pub rock scene of the early ’70s. Together with his backing band The Rumour, Parker developed a sinewy fusion of driving rock & roll and confessional folk-rock, highlighted by his indignant passion, biting sarcasm, and bristling anger. Cloud Symbolsis his 24thstudio album.