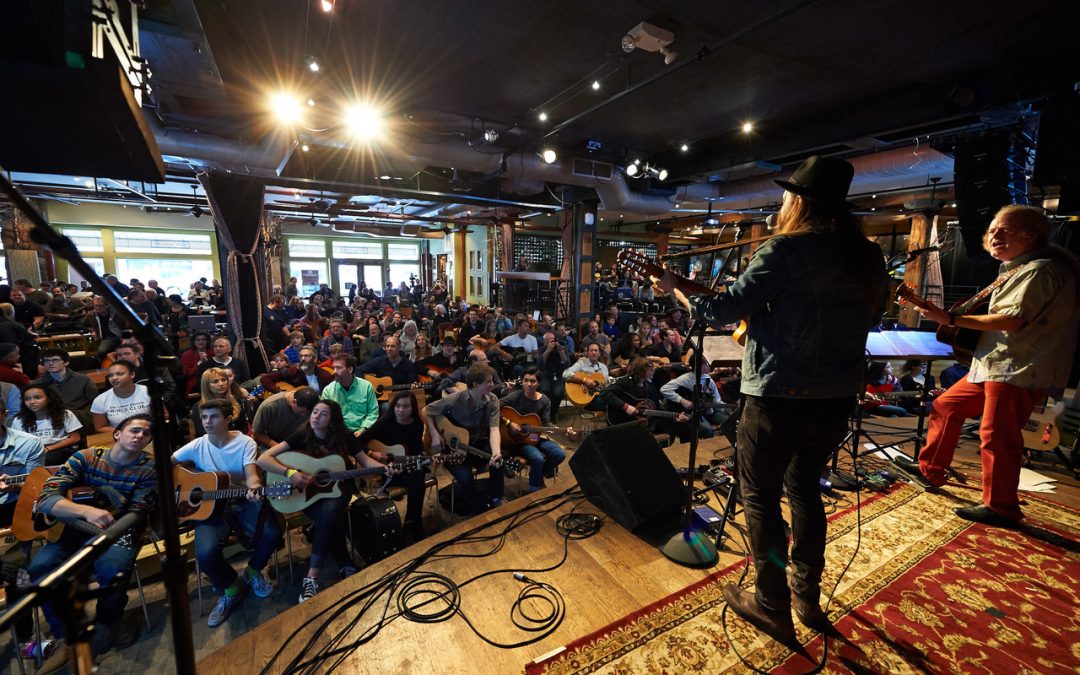 Artists lead audience in the songs that shaped them including Set Fire To the Rain – Adele, You Never Can Tell – Chuck Berry, Space Oddity – David Bowie, No Rain – Blind Melon + more

Since 2012 Guitar Mash has presented Urban Campfires, live, participatory music events that allow audiences to perform along with renowned guitarists and singer-songwriters. Each Urban Campfire is a unique and immersive event that does away with lines between artist and audience, engendering a true collaborative community.

Announced for Sunday afternoon November 17th, 2019, the NYC Urban Campfire will feature audience members singing and playing along with legends such as Dion and The Lovin’ Spoonful’s John Sebastian, and rising stars of today Amythyst Kiah, Tash Neal and Sammy Brue. There will be special appearances by Guitar Mash alums Jimmy Vivino and Scott Sharrard, as well as by Brandon “Taz” Niederauer joining the Guitar Mash teens. Guitars and musical training are not requirements – anyone and everyone are encouraged to join in the communal experience.

Artists will lead the songs that shaped them, sharing stories along the way. Songs will be projected for easy follow-along by the audience. They include:
“Set Fire To the Rain” – Adele
“No Rain” – Blind Melon
“You Never Can Tell” – Chuck Berry
“Space Oddity” – David Bowie
A Spotify playlist featuring all of the songs to be performed is available here.

The Urban Campfire is the brainchild of founder and Executive Producer Rebecca Weller and Artistic Director Mark Stewart, who also serves as Paul Simon’s long-time music director and is a founding member of the Bang on a Can All-Stars. Weller is a veteran producer and social entrepreneur who founded groundbreaking participatory programs including Lincoln Center’s Midsummer Night Swing and Harmony in the Kitchen.

Guitar Mash has enjoyed steady growth since the original New York City Urban Campfire in 2012, establishing an annual Nashville version in 2018 and initiating a free monthly songwriting circle for teens. Next up will be a Queens edition of the popular Urban Campfire, to be announced at the November 17th event.

Partnering with Guitar Mash this year is guitar manufacturer Recording King who will provide loaners for audience members who either don’t have one of their own or are looking to check out a new instrument. Afterwards these guitars will be donated to some of Guitar Mash’s teen community partners in need of instruments.

Hint® and Fishman® are official sponsors of Guitar Mash.
Guitar Mash also receives support from the D’Addario Foundation and GAMA.

Mark Stewart
Since 2012, multi-instrumentalist, singer, song leader, composer and instrument designer Mark Stewart has been the Artistic Director of Guitar Mash, leading the participatory communal Urban Campfires together with renowned artists sharing their favorite songs and life stories. Since 1998 he has recorded, toured and been Musical Director with Paul Simon. A founding member of the Bang on a Can All-Stars and the comic duo Polygraph Lounge, Mark has also worked independently with leading artists of many disciplines. He has worked extensively with composer Elliot Goldenthal on music for film, often playing instruments of his own design and construction. Mark is a co-founder of SoundstewArt, an organization that designs & builds immersive musical environments. He is a Visiting Lecturer in musical instrument design at MIT and is also curator at MASS MoCA of the immersive Gunnar Schonbeck exhibit of musical instruments.

John Sebastian
The contributions of Rock and Roll Hall of Fame member John Sebastian are a permanent part of our American musical fabric. His group, The Lovin’ Spoonful, played a major role in the mid-’60s rock revolution scoring numerous hits. He also performed at Woodstock in 1969 as a solo artist and has since continued to record and tour. Perhaps because it has been the product of heart and soul and history, the oldest song in the Sebastian catalog is as fresh and vital as the song he’s about to write tomorrow. A master musician, writer and performer, Sebastian remains one of the best ambassadors American music has ever had.

Dion
Dion is a legendary American singer-songwriter and Rock and Roll Hall of Fame member whose work has incorporated elements of doo-wop, rock and R&B styles—and, most recently, straight blues. He was one of the most popular American rock and roll performers of the pre-British Invasion era. He had more than a dozen Top 40 hits in the late 1950s and early 60s. Songs such as “Teenager In Love,” “Runaround Sue,” “The Wanderer,” “Ruby Baby,” and “Abraham, Martin and John” are woven into the fabric of American rock history.

Sammy Brue
With influences spanning from Woody Guthrie to Nirvana, Utah-based Sammy Brue began writing songs and exploring his deep love for Americana and country-folk at the age of ten. By the age of 13 Brue was opening for Joe Fletcher, Lukas Nelson, Lydia Loveless, Asleep at the Wheel, and Hayes Carll, and by the age of 14 he had released two EPs and garnered praise from the likes of Lucinda Williams and Justin Townes Earle, the latter of whom took the young troubadour under his wing. In 2017 Brue released his John Paul White and Ben Tanner-produced full-length debut, I Am Nice (New West Records).

Tash Neal
Tash Neal is a guitarist, singer and songwriter based in Harlem, NYC. As one half of The London Souls, Tash opened for such artists as The Who, Lenny Kravitz, Gary Clark Jr., The Black Crowes and Tedeschi Trucks. In the fall of 2018 Tash shared the stage with Slash at the ‘Across The Great Divide’ Benefit Concert. Tash is currently working on a new solo project, and has also teamed up with brothers Matt, Dave, and JoJo to form TASH and the GetBack which recently served as the house band for the T Bone Burnett-produced Easy Rider Live event at Radio City Music Hall.

ABOUT GUITAR MASH
Guitar Mash, a 501(c)(3) non-profit organization, is leading a movement to change the way we experience music. Their signature participatory Urban Campfires, led by artists sharing their favorite songs and life stories, erase the boundary between stage and audience, connecting people of diverse backgrounds and all musical abilities.

“Playing guitar with someone else is a communal experience, and playing and singing together is an intimate thing, and it’s a joyful thing, and that is all captured at Guitar Mash.” – Buddy Miller, Urban Campfire Artist Alum, Nashville 2019