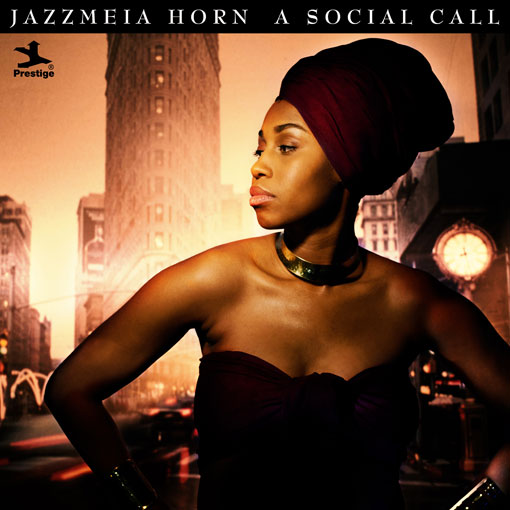 “The most talked-about jazz vocalist to emerge since Cécile McLorin Salvant and Gregory Porter…a mix of didacticism and sweetness.” – The New York Times

“Horn has a thrilling presence, with a musical sensibilty that strikes a deft balance between mid-century jazz and contemporary neo-soul” – DownBeat

For Immediate Release – Destined to be remembered as a 2017 breakout, acclaimed singer Jazzmeia Horn’s debut album, A Social Call, has been nominated for a GRAMMY Award® in the category of Best Jazz Vocal Album.

A Social Call, released on May 12, 2017 via Prestige, a division of Concord Music, showcases Horn’s astounding range and seamlessly blends the best of vintage with contemporary. The album’s 10 tracks—performed with an all-star acoustic jazz lineup—bristle with a bracing sense of clarity that has captured the attention of critics around the world.

“Jazzmeia Horn is one of the most amazing young jazz vocalists I’ve ever heard,” says John Burk, Concord Records President. “She possesses incredible talents, combining a stunning voice and unmatched vocal facility with social consciousness and a wisdom beyond her years.”

CRITICAL ACCLAIM FOR A SOCIAL CALL:

“Just 25, the Dallas-born Horn emerges as a fully realized stylist and a first-rate scatter whose vivacity, imagination, gutsiness and socio-political savvy echo the likes of Carter and Abbey Lincoln. Simply put, she is as exciting a discovery as Cécile Mclorin Salvant or Gregory Porter.” – JazzTimes Editor’s Pick

“Her gift and calling have since led her through the most rigorous vetting process available to a present-day jazz singer—and now on to A Social Call (Concord/Prestige), the rangy, self-possessed major-label debut that could herald the next big voice in her field.” – Texas Monthly

“Horn’s Titanic vocal skills are matched by her depth of character and artistic purpose; all of which inform A Social Call.” (4 Out Of 5 Stars) –All Music

“With the benefit of Horn’s vocal prowess, A Social Call is an album that satisfyingly combines jazz of the classic, small-group variety—when singers had to step up and carry the same musical weight as any other band member—with more modern flavors of gospel and neo-soul.” – Soul Tracks

“The Dallas-born vocalist’s stunning ability to channel the icons of the ‘50s and ‘60s will make any listener fall in love…This album is a joy to listen to..” – Elmore

“Exhibiting an advanced artistic development and confidence associated with more established performers, Jazzmeia Horn exudes an intense sense of purpose, and delivers an outstanding repertoire skillfully suited to her talent.” (4 Out Of 5 Stars) – All About Jazz

“One fact is obvious from Jazzmeia Horn’s debut album: this woman can sing! A talent like this doesn’t come along very often, and I can’t wait to hear what the future will bring.”- Black Grooves