Chris Farlowe and The Thunderbirds: The Beginning… 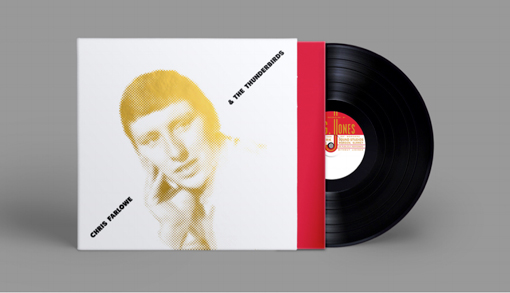 Available now for the very first time, Chris Farlowe and The Thunderbirds: The Beginning…presents a 12-song demo recording produced by legendary guitarist and producer Jimmy Page. Recorded in 1961 at RG Jones Sound Studio in Morden, London, this historic session marks the launch of a highly successful career for Chris Farlowe.

It was also the very first official turn in the producer’s chair for Jimmy Page who went on to capture the timeless studio and live performances of Led Zeppelin that today serve as a blueprint for all modern rock recordings that followed in their formidable wake.

For both, it all started with “The Beginning…”

In his liner notes accompanying “The Beginning…” Farlowe summarized his first encounter with Page and the session by stating, “We would play anywhere just for the buzz and it was at one of these gigs that we met a very young boy called Jimmy Page, who liked my band and my guitarist Bobby Taylor. Jimmy suggested that he wanted to record a demo album of the band, so he booked the RG Jones studio in Morden, London, and now after 56 years, it is to see the light of day.”

And what a musical storm they conjured! As Page points out in his liner notes for the album, you’d never know that Farlowe and his band mates were in a recording studio for the first time. “The band settled into their recording role immediately and an album was recorded that day. The guitar and bass were recorded by direct injection and the band listened to their progress via headphones…They adapted really quickly to this method, the individual performance exhibits the style and class that this band had and Chris Farlowe’s performance is absolutely extraordinary.”

The band’s tightness and musical telepathy is apparent from the get-go with two hard driving instrumentals to kick off the recording. The opening track, Entry of the Slaves, features Bobby Taylor on guitar who is described by Page in the liner notes as, “the coolest stylist, both in his image and his playing, that I had seen in a guitarist who was in an unsigned band.” The incendiary Spring is Near follows and showcases the rhythm section’s individual and collective talents with both Johnny Warne on bass and Johnny Wise on drums contributing thrilling solos.

On track three, Farlowe steps up to the mic and tears into a powerful version of the Ray Charles classic What’d I Say. Next up are spirited versions of the rock and roll classics Let the Good Times Roll, Sticks and Stones, Kansas City and I’m Moving On. Each track is powered along by Wise and Warne, and feature cracking guitar solos from Taylor.

The volume and tempo comes down, but the intensity remains high on the soulful ballad Just a Dream, which features an emotional and heart wrenching vocal turn from Farlowe. On this track, The Thunderbirds provide brilliant dynamics and atmosphere to set the perfect mood behind Farlowe’s vocal.

From here, the recording shifts gears again with Money driven along by a rumbling beat on the tom-toms from Wise and more gorgeous guitar work from Taylor. Farlowe’s howling vocal breathes new life and fire into this timeless rock and roll standard.

On Matchbox, The Thunderbirds lay down a powerful and respectful homage to the great Carl Perkins classic with a groove that chugs along like a freight train barreling down the track, with every strum, pluck and beat brilliantly captured by Page on tape.

Next up, Farlowe and The Thunderbirds make Don Gibson’s Hurtin’ Inside their own with Taylor’s fiery licks and Wise’s snare drum work perfectly complimenting Farlowe’s soulful delivery and his incredible range.

A spirited version of Bobby Parker’s Watch Your Step closes out the proceedings with Farlowe deftly pushing the band along, climbing up his range effortlessly into falsetto and ad-libbing brilliantly into the fadeout.

Page’s complete satisfaction with what he was able to capture on tape that day is abundantly clear. “I’m really pleased to be able to make this musical document available for the first time to give an idea of the musical cauldron that was going on in London in 1961, a few years before the Chicago Blues renaissance and The Beatles.”

These recordings on The Beginning…marked the first collaboration between Page and Farlowe who went on to work together when Page was a session musician and Farlowe was on Immediate Records. Page featured on the hit single Out Of Time. In 1982, Farlowe featured on Page’s Death Wish II soundtrack, and again when Farlowe made a guest appearance on Page’s 1988 solo album Outrider.

Chris Farlowe and The Thunderbirds: The Beginning is now available for pre-order at Jimmy Page.com in advance of its April 30 release date. The release is available in two editions: Standard and Deluxe. The 1-LP, 1-CD set is available signed and numbered by Chris Farlowe and Jimmy Page in a limited edition release bringing the signatures of two music legends together for the very first time.

Track Listing For ‘The Beginning…’