The Rhythm Of Rio, The Romance Of Sinatra: Celebrated Guitarist And Singer John Pizzarelli Revisits A Bossa Nova Classic At 50 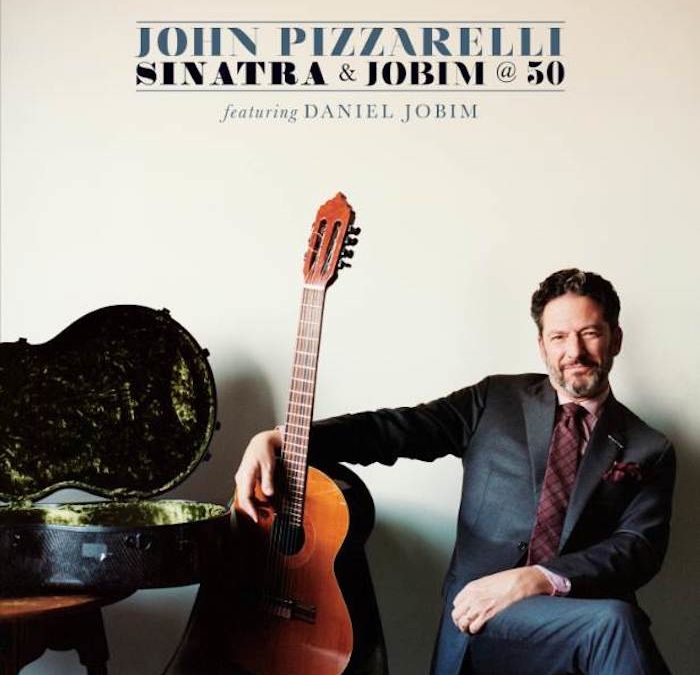 Two of John Pizzarelli’s greatest influences, Frank Sinatra and the bossa nova composer Antonio Carlos Jobim, joined forces in 1967 to present a softer, sultrier side of Sinatra on the heels of “That’s Life” and “Strangers in the Night.” Half a century later, John Pizzarelli is celebrating that unique gathering with his July 28, 2017 Concord Jazz release Sinatra & Jobim @ 50.

Sinatraphiles consider the 1967 album Francis Albert Sinatra & Antonio Carlos Jobim one of Frank’s greatest, a meeting that found Frank in an out-of-character setting. Yet he delivered a commanding and understated performance over Jobim’s gentle rhythms and Claus Ogerman’s strings. With Sinatra & Jobim @ 50, Pizzarelli pays tribute to those original recordings, enhancing that collection with two originals, Michael Frank’s ode to Jobim and songs that Sinatra and Jobim recorded at a 1969 session.

“Jobim was such a big influence on me in the 1980s—what I was hearing, then translating and what I was taking away from it,” John says. “A lot of what we did on this record, the medleys and the arrangements for the new songs, come out of what they did on their album and the influence they have had on my music.”

Jobim’s grandson, Daniel Jobim, is John’s duet partner on the Jobim classics Sinatra and Jobim recorded together: “Agua de Beber,” “Bonita,” “This Happy Madness (Estrada Branca)” and “Dindi,” plus a medley of “Meditation” and “Quiet Night of Quiet Stars.” They also cover the standards from the 1967 LP, “Baubles, Bangles & Beads” and a medley of “Change Partners” with Jobim’s “If You Never Come to Me” plus Cole Porter’s “I Concentrate on You,” which is paired with Jobim’s “Wave.”

Each is interpreted with a tip of the cap to the 1967 album and bossa nova in general: The intro to “She’s So Sensitive” is taken from Jobim’s “How Insensitive”; John added a João Gilberto guitar lick to his “Canto Casual”; and the end of “Antonio’s Song” is the vocal line to “The Girl From Ipanema.”

The idea for Sinatra & Jobim @ 50 sprang up after Pizzarelli and his quartet had a successful string of shows in Brazil in June 2016. One of those shows fell on the birthday of guitarist João Gilberto, whose legendary recording of “The Girl From Ipanema” with Stan Getz made bossa nova a global sensation in 1964. John says his 2004 record Bossa Nova was in many ways a tribute to Gilberto.

“My manager said you should think about making another Brazilian record and I looked around at what would make sense in terms of an anniversary,” says Pizzarelli, who spent much of 2015 and ’16 honoring Sinatra’s centennial with a Frank-centric touring show. “I looked around and noticed Sinatra-Jobim was going to be 50. I thought I’ll call Daniel and ask, ‘you want to do this?’ It could be fun.”

The two had already worked together during John’s annual spring runs at New York’s Café Carlyle. (Drummer Duduka Da Fonseca and piano player Helio Alves, who appear on the album, also performed with them at the Carlyle). The set list came together easily and Jobim sent Pizzarelli outtakes from the sessions from 50 years earlier for research purposes. And like that album, the new one was recorded in three days.

“We did the tracks in two days with Daniel recording his parts in his grandfather’s studio in Brazil,” John says. “The hardest one was ‘Two Kites.’ My father Bucky is on that record by Jobim”—1980’s Terra Brasilis—“so I thought we had to do that.”

“The idea behind the extra songs was ‘what if their relationship had continued?’ Our relationship, Daniel and mine, made me feel we could add these other songs in there and put our little stamp on it.”

Sinatra and Jobim recorded 10 songs in early 1967 and in April it peaked at No. 19 during a 28-week run on the Billboard chart, eventually receiving a GRAMMY nomination for Album of the Year. Two years and four Sinatra albums later, they reunited, replacing Ogerman with Eumir Deodato and recorded another 10 tracks. Sinatra didn’t care for the way he sounded at those sessions and had Sinatra-Jobim killed at the 11th hour; seven of its tracks were on Sinatra & Company in 1971 and the final three first appeared on Concord’s 2010 release The Complete Reprise Recordings.

Stylistically, Sinatra & Jobim @ 50 was not as much a stretch for Pizzarelli as it was for Sinatra. Adding to his confidence in the studio was a secret weapon in the band.

“I said to our bassist Mike Karn, ‘if Duduka is frowning, you’re in a bad place. When something’s going good, Duduka will let you know.’ You always want the Brazilians to let you know you’re doing it right. He seemed to always know which takes got the feeling right.”