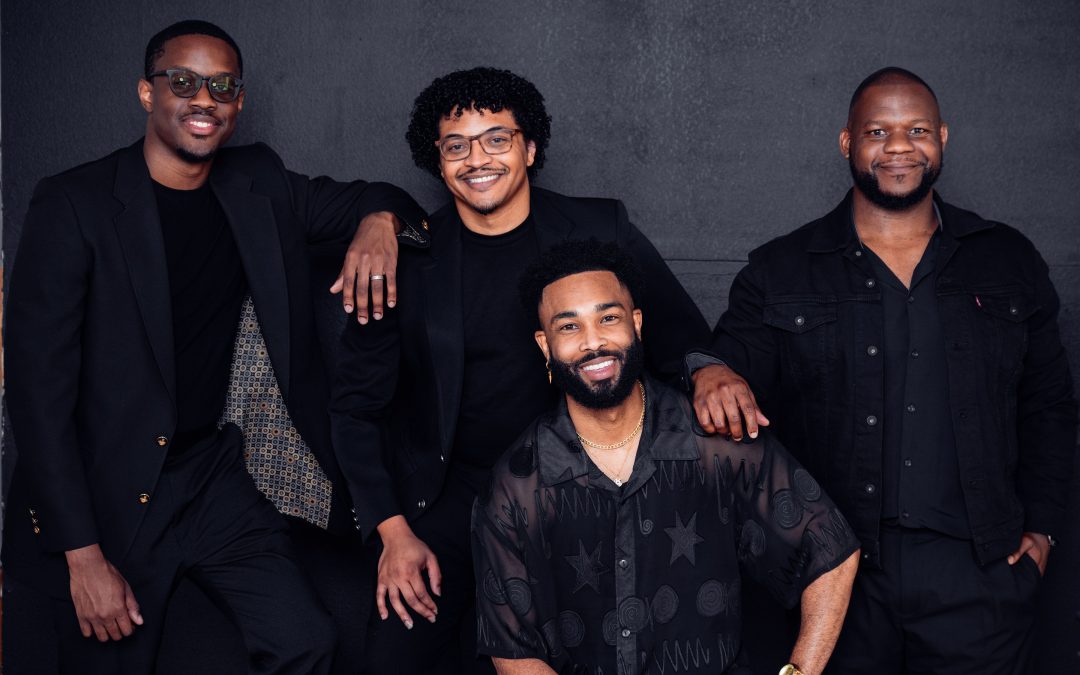 Videos of Kings Return have captured the imaginations and ears of fans across the internet, garnering 10 million views on YouTube and elsewhere. Featuring tenor Vaughn Faison, bass Gabe Kunda, tenor JE McKissic, and baritone Jamall Williams, the quartet recorded stripped-down videos of them singing in a stairwell. While the white walls and stairs were non-descript to look at, the four men in ordinary street clothes were captivating as their genre-breaking arrangements soared, dipped and harmonized with exquisite grace.

Recognition of the band’s unique sound and approach comes from all over, including such artists and brands as Emily King, Anita Baker, Anthony Anderson, Joyce DiDonato, Apple, The Dallas Morning News, and NPR. The group’s Christmas EP led to an eight-minute feature on NPR’s flagship All Things Considered. According to Gabe, “It kind of came out of the blue. We just did not expect to do that. They saw our “Ave Maria” video, and that got their interest. Then the timing of our Christmas EP. We had no idea how many people listened to NPR or read it. Our numbers just started to climb. It was like: “Wait. Oh! This mattered.”

Based in the Dallas-Fort Worth area, the group formed in 2016 as a part of Gabe’s college graduation recital. Rather than featuring himself, Kunda opted to have a little fun and bring in three friends to sing with him. It was a sensation from the start and grew organically from there. “Initially, we were doing a lot more sacred music, as opposed to gospel,” explains Gabe. “We did church gigs that were more gospel stuff, but we had a background in classical or choral singing, but we definitely didn’t want to box ourselves in. We’ve been trying to marry it all together since 2020.”

The skill, talent and training involved in these performances are crucial, but practice is still an essential part of the process. Rather than do it at a studio or someone’s house, the group ended up in a stairwell at work. “It was just a very convenient place for us to practice. It wasn’t that we were seeking this amazing space. It’s just a stairwell outside my office at Cornerstone Baptist Church in Arlington,” explains JE, who has been on staff there for 20 years.

Applying that same diligent work ethic to the recording process, the group cut the album one song at a time over several months. A few of the tracks were recorded at home studios, but most were done at Luminous Sound under the watchful eye and ear of producer Rosana Eckert. She ensured that each song explored a different facet of the group’s unique sound while being part of a cohesive whole.

The group also commissioned a variety of talented arrangers, making sure that the interpretations have that extra bit of magic. “Acapella is flexible, we don’t have to be choral or R&B, explains JE. “We can take advantage of it being genre-less.”

The group picks the material together, discussing who will solo. While the songs are generally family-friendly, they also address issues that the four men wrestle in their lives. “There has to be an emotion at its core,” Vaughn says of the group’s choices. “Do we feel something when we hear it? Then we break down which parts we don’t want to mess with and which parts we can expand upon and put our signature on.” The band then gets the arrangements back and works them. Sometimes changes are made, and songs may be sent back to the arranger for refinement. [we need this to set up the following quote, which is colorful and insightful into the band’s chemistry.]

“Gabe is the Joe Jackson of the band, putting us through our paces,” Jamall says with a chuckle. “Or, he’s Mattie Moss Kunde: Mattie Moss Clark was the driven mother of the Clark Sisters [a gospel singing group]. Things are more pleasant when Gabe is happy, but he has the drive that pushes the band to be more than they thought they would be.”