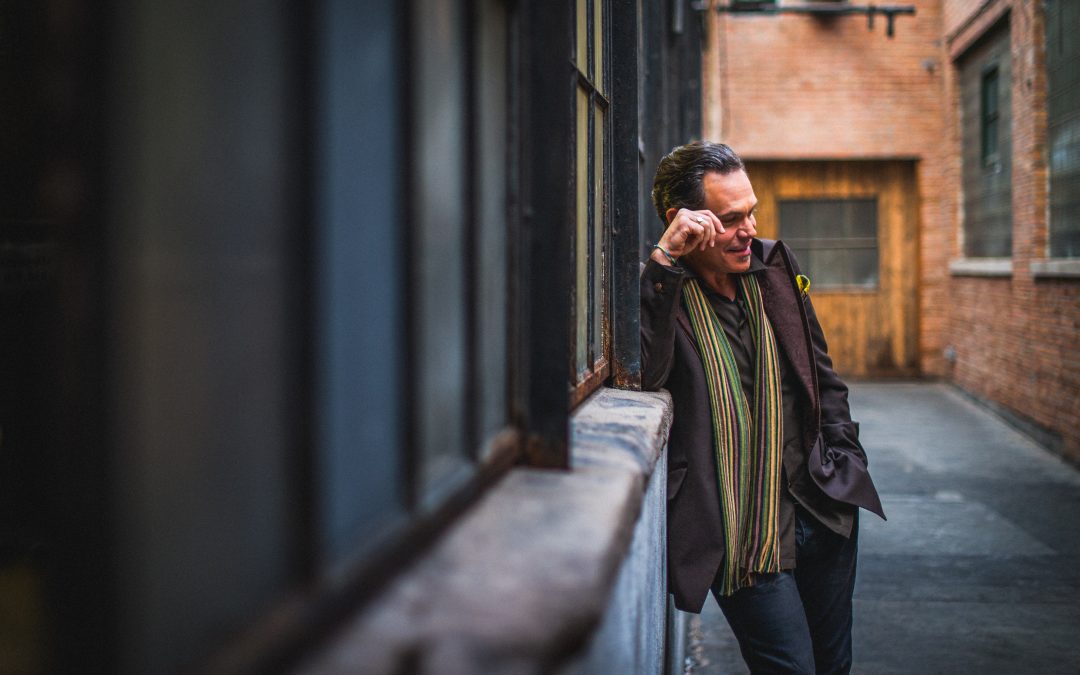 Grammy winning vocalist Kurt Elling returns in style with an album of indelible beats, roisterous funk and unforgettable new lyrics in collaboration with co-producer Charlie Hunter, and with Corey Fonville and DJ Harrison of Butcher Brown.

After scoring his second GRAMMY Award (and 14th nomination) in March 2021, the protean vocalist Kurt Elling hangs an unexpected left turn with SuperBlue for Edition Records. It’s a torrent of roisterous funk, indelible beats and all-too-current lyrics that boasts the talents of producer-guitarist Charlie Hunter and two stars of the hip-hop generation: drummer Corey Fonville and bassist-keyboardist DJ Harrison (both of the genre-hopping band Butcher Brown). Elling has always been a master of grooves, ranging from bebop to pure pop and progressive jazz to neo-soul, but he’s never filled an album with grooves quite like these.

Thanks to newly sprung melody and lyrics from Elling, along with Hunter & co.’s fresh grooves, SuperBlue features all-new songs, innovative takes on compositions from jazz lions Wayne Shorter and Freddie Hubbard, and a raw and stripped-down treatment of “The Seed,” a still-dynamic, decades-old riff on immortality written by Cody Chestnutt. There is even a slamming new version of a Tom Waits tune.

Elling has never made an album like this – and he’s never made any album in the way that SuperBlue took shape. To this day, he has yet to meet the members of Butcher Brown in person: with travel confined by the COVID-19 pandemic, their collaboration happened across distance of roughly 1,000 miles, with Hunter acting as go-between. In their Virginia studio, Fonville and Harrison met with Hunter to hammer out an assortment of grooves and colors; at his home in Chicago, Elling took the rhythm tracks and determined whether they called for new melodic narratives or were better suited to existing compositions. Once the groundwork was complete, Elling and Hunter got together at a converted horse barn in Urbana, Illinois, where they recorded the vocal and solo guitar tracks and mixed it all down.

For all that, Fonville considers this “one of the most organic sessions” he’s ever done, with a surprising lack of hassle or fuss. “The seeds were planted a while ago,” Elling says, “and then the pandemic got [Charlie and me] both stuck at home. The time inside was the hothouse for something new to grow. Finally, the seeds busted open and grew into this crazy, weird COVID flower.”

The writing process gave Elling the chance to return to several of his now-familiar passions, such as the Beat Generation, current politics and the interpolation of contemplative poetry into already transcendent ballads. But even these touchstones buzz with the fresh energy of contemporary jazz-funk fusion. Speaking about Fonville and Harrison, Elling is grateful. “For those gifted young cats to give me the trust, and to vibe with me and be so enthusiastic about this project, is a great compliment. It’s enlivening and even rejuvenating in the truest sense of the word. I haven’t been paying as much attention to the groove-oriented stuff that younger cats have been developing, except in a cursory fashion – not because I don’t like it, but because I’ve been focused for so long on learning from cats like Prez and Wayne and Dexter Gordon. I feel like Joe Square-Britches coming into this stuff.”

That’s far from how the Butcher Brown musicians see Elling, widely acclaimed as the pre-eminent male vocalist in jazz. “I’ve loved Kurt’s music since high school,” says the 30-year-old Fonville, who co-produced the album. “I mean, he’s a legend at this point. I obviously knew him more as a straight-ahead vocalist, but I felt like he would feel at home with us – partly because our music is so rooted in the blues and Kurt already has a lot of blues in his music. And I was super happy at the fact that he trusted us enough to really steer things in this direction.”

Elling also placed his trust in the production expertise of Charlie Hunter to bridge the worlds of Elling and Butcher Brown; in fact, with his unassailable cred in both the jazz and groove camps, Hunter is perhaps the only musician who could have done so. “Between the records he’s made with cats like D’Angelo and John Mayer and A Tribe Called Quest, Charlie is a made guy in that world, just as he has the respect of jazz people” says Elling, who first met Hunter when both were signed to Blue Note Records in the late 1990s. They struck up an immediate rapport, leading to Elling’s guest appearance on Hunter’s album Songs From the Analog Playground; more recently, during the pandemic shutdown, they worked on some highly funkified videos for the weekly webcast Elling hosted during 2020.

As Hunter explains, “We both really thought that making those vids was a lot of fun, and when Kurt decided he wanted to make a whole record like that, he asked me to produce it. We shot some ideas back and forth and then I brought up Butcher Brown, because these guys have a great community and a great collective sound.” Hunter initially had no plans to bring his guitars to the sessions, but Elling insisted that he play on the date as well as produce. Hunter gladly gave in. “It was great working with Corey and DJ,” he says now – especially because the project didn’t call for any long guitar solos. “I’m much happier when I’m just grooving and laying in the cut, you know?”

On SuperBlue, those grooves are generous and bountiful and the mix is phat and vibrant, creating springboards for some of the most vivid tracks of Elling’s career. The new rhythmic playground shows off Elling’s still-broadening vocal prowess. The arrangements extend the singer’s already remarkable range and expand his role as a gifted storyteller, adept at both hipster humor and soul-shattering pathos.

For the former, go directly to “Can’t Make It With Your Brain,” a hilarious spear to the heart of conspiracy disinformation, wrapped in a dance-club scenario. For the latter, there’s his reprise of the Carla Bley composition “Endless Lawns,” which previously appeared on his album The Questions, and which carries a breathtaking Elling lyric, highlighted by a Judith Minty poem that clarifies the song’s ethereal beauty.

Elling’s serpentine lyrics combine with the psychedelic production to make Super Blue, Freddie Hubbard’s late-70s fusion gem, the latest addition to his portrait gallery of jazz classics. On ”Sassy,” the band freshens the dance rhythms that the Manhattan Transfer used in their 1991 tribute to Sarah Vaughan. Then Elling switches gears on “Where to Find It,” transforming Wayne Shorter’s rapturous “Aung San Suu Kyi” into a Buddhist meditation, with the assistance of Charles Twichell’s haunting poem “Animal Languages.”

Among the originals, Elling honors the centennial of Jack Kerouac – with asides to David Amram and Mose Allison – on Dharma Bums, an affectionate view of On the Road that crashes headlong into Circus, a prose poem from the Beats’ direct descendant Tom Waits. Waits recorded this offbeat narrative against a spooky big-top dirge; Elling intones it against a slam-dance funk groove that recasts the piece from a 50s pulp-noir paperback cover to a neon panel by Ed Paschke. And “Manic Panic Epiphanic” lifts the spirit with a message of hope – falsetto harmonies from the Bee Gees book – at a time when the world needs it most.

The universal accolades for Elling don’t always mention his relentless, career-long, search for new vistas. He’s recorded an album of global love songs (Passion World) and transformed the Christmas tradition (The Beautiful Day); he’s written lyrics to jazz classics, staked out 1960s-70s rock-n-roll (on 1619 Broadway), and entered into a galvanic partnership, on disc and on tour, with Branford Marsalis’s quartet. He earned his first GRAMMY for updating the historic collaboration between John Coltrane and Johnny Hartman (Dedicated to You), and his most recent statuette for Secrets Make the Best Stories, his Latin-inspired project with modern piano giant Danilo Perez.

With SuperBlue, Elling continues on this path of bold collaboration – within the confines of worldwide lockdown – to map out a strikingly new direction, on a project guaranteed to gain new listeners and stretch the ears of his devoted admirers.