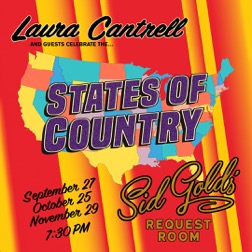 More upcoming appearances include Chickfactor 25, The Hopewell Theater, ‘Outpost In The ‘Burb’s’ and the 2018 Outlaw Country Cruise

Acclaimed singer Laura Cantrell has confirmed a string of shows this Fall and Winter, beginning with the return of States of Country to Sid Gold’s Request Room, the last Wednesdays of September, October, November, starting September 27. Along with a small combo, Cantrell will be joined by guest performers throughout the series like Smoky Hormel, Chip Taylor, Dave Hansen of acclaimed NY-based swing group Western Caravan, Mary Lee Kortes, The Tall Pines, Fiona McBain and Liz Tormes.

Says Cantrell, “I was planning to feature the music of Texas in our September show, but while watching that state take such a hit from Hurricane Harvey last month, I decided we should celebrate Texas music in all its varieties at all three SoC shows this fall and make them all fundraisers for storm relief. We hope you can join us in this effort, these will be really special performances.”

Cantrell will also join Chickfactor 25: A Series of Fortunate Events on November 4 at Brooklyn’s Union Pool, and in December, rounds out the year with a trio of shows including a return to favorite house concert, the Roots Hoot in Peace Dale, RI, on December 2, The Hopewell Theater in Hopewell, NJ on December 9 and a special holiday edition of her show at  The Outpost In the Burbs in Montclair, NJ on December 16.

Cantrell also appears every week this fall as the host of for Dark Horse Radio, a weekly program devoted to the music of George Harrison for SiriusXM’s The Beatles Channel. New shows debut on Thursdays at 2:00 PM Eastern and will be rebroadcast on SiriusXM Channel 18 several times throughout the week.

At The BBC on Apple Music: https://itun.es/us/ngzQcb