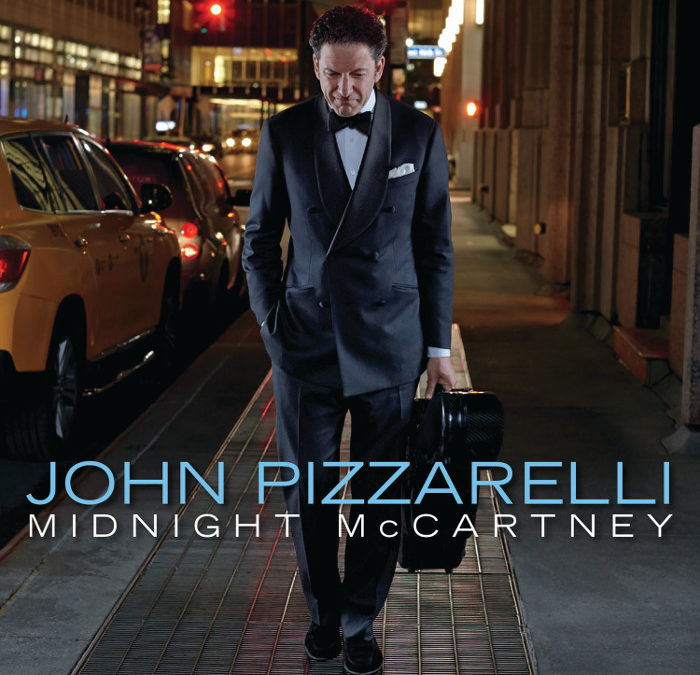 Paul McCartney had a great idea for an album. He just needed the world-renowned guitarist and singer John Pizzarelli to make it.

“I got an idea got in my head,” McCartney wrote to Pizzarelli in late May 2014. “It might be interesting for you to do a few of my songs that are lesser known than some of the others. I realize this may be a little immodest, if not pushy.” “I imagine the songs would include post-Beatles melodies of mine like ‘Love in the Open Air’ (from the soundtrack to 1967 film The Family Way), ‘Junk,’ ‘Warm and Beautiful’ and, possibly, ‘My Valentine.’”

“My Valentine” was the one McCartney composition on his album of songs from the ’30s and ’40s, Kisses on the Bottom (MPL/Hear Music/Concord). Pizzarelli played guitar on the album and backed Sir Paul on a handful of prestigious live performances, including the GRAMMY Awards, MusiCares Person of the Year gala and the initial iTunes/Apple TV live broadcast. Hailed as one of the prime contemporary interpreters of the Great American Songbook, Pizzarelli has expanded his repertoire by performing the music of Joni Mitchell, Neil Young, Tom Waits, Antônio Carlos Jobim and Lennon-McCartney.

McCartney concluded in his letter, “The attraction for me is lesser-known tunes done in a mellow jazz style and, if it gets some traction, maybe the album could be titled Midnight McCartney. As I said, this may tickle your fancy or you may decide these are the ramblings of a deranged composer with too much time on his hands.”

To say Pizzarelli was tickled is putting it mildly.

Pizzarelli, his wife Jessica Molaskey – co-producer of Midnight McCartney – and pianist Larry Goldings immediately went into research mode, digging through McCartney’s albums of the last 45-plus years to find songs that could be re-harmonized and adapted for Pizzarelli’s trademark style.

“I immediately found ‘Warm and Beautiful’ and ‘Junk’; Larry Goldings brought in ‘Waterfalls’; my wife found ‘Heart of the Country’,” Pizzarelli says. “We started to realize how brilliant these songs are. He’s obviously a rock ‘n’ roller, but they were really easy to break down.

“When I did the Beatles record in 1996 (Meets the Beatles), I found you can really re-harmonize that stuff, find nice harmonies and not get too crazy. That’s the challenge and the fun of the whole thing.”

The idea of Midnight McCartney was an easy one to warm to: A half-dozen of Pizzarelli’s albums have been devoted to a single artist or style: Duke Ellington, Frank Sinatra, the Beatles, bossa nova. The title, too, captures the treatment of the songs.

“It’s like the Sinatra thing – Songs for Swingin’ Lovers or Moonlight Sinatra – it gives people an idea to hang their hat on,” Pizzarelli says.

The project started with Pizzarelli and Goldings making demo recordings of ballads – “My Love,” “Some People Never Know,” “Heart of the Country” and “Waterfalls” – and while Pizzarelli was touring, he would work on other songs, among them the up-tempo numbers. The intensity of the sessions, Pizzarelli says, was higher than for most recordings – every musician knew that Paul McCartney would be listening to their work.

“It’s amazing what the power of McCartney means to so many people,” Pizzarelli notes. “Everyone elevates their game. Not that they wouldn’t play their best normally, but there was this special thing. You tell a Paul McCartney story to the string section before a take and they’re saying, ‘Let’s make sure we get this right.’ Michael McDonald, my guys, the Brazilians – the second they hear ‘Paul McCartney’ they get really, really excited.”

The Beatles broke up when Pizzarelli was nine years old, and his fascination with their albums lingered, particularly Abbey Road and Rubber Soul through his teen years, and their early work when he was in his 20s, which included playing the songs the Beatles covered in his own rock band in New York.

Long a McCartney fan, Pizzarelli has kept up with his work over the decades, noting a strong affinity for his albums Tug of War and Pipes of Peace.

“I always loved finding his new records and hearing what he was up to,” Pizzarelli says. “When this record came along I had a lot of fun revisiting things like Venus & Mars.”

Rather than record in New York City, they moved the operation to the Jacob Burns Film Center and Media Arts Lab in Pleasantville, N.Y.

“The beauty of the project was having a lot of time to sit and listen to these things and make sure it was right,” Pizzarelli says. “There were a lot of things we had never done before – a lot of background vocals, additional horns and handclaps. That really made it into something.”

And like most Pizzarelli records, it’s a family affair: wife Jessica Molaskey co-produced the album and provides background vocals; John’s father Bucky adds rhythm guitar on several tracks and a stunning solo on “Junk”; brother Martin is on bass throughout; and teenage daughter Madeline got into the act, transcribing “Warm and Beautiful” for her father to sing in a different key.

“We’re McCartney fans and this is our way of letting people know these are good songs,” he says. “It’s a take on the songs within a style we’re comfortable with. If one became a hit, we’d be fine with playing it for the next 20 years.”

Pizzarelli offered background on his approach to the music of McCartney:

“Larry Goldings was on the road and he did a fast version of ‘Silly Love Songs’ with a drum machine, singing in faux-Portuguese. He sent that in as a joke and I played it for my wife and we said, ‘Oh, that works.’ When we put the two Brazilians on it, we freaked at how well it worked.”

“My father Bucky plays rhythm guitar on a couple of things. He plays beautiful rhythm on ‘My Love’ and a great Freddie Green thing on ‘Coming Up,’ so you get that freight-train thing going in the rhythm section.”

“ Heart of the Country”

“When we started the project everyone went into song-finding mode. My wife found ‘Heart of the Country,’ a song I wasn’t familiar with. It sets itself up to be a great little rhythmic tune.”

“Our piano player Konrad Paszkudzki came up with a Gene Harris, swinging shuffly thing for ‘Coming Up.’ We messed around with it on the road as kind of a soul song. I sent it to Michael McDonald and he sang the whole thing, sent it back to us and it was just a matter of plugging myself in.”

“It’s amazing how wide-ranging vocally this stuff is. My wife asked to take it down; the high stuff is too high – you have to be aware of that. On ‘No More Lonely Nights’ you have to start really low or else you’ll end up being Barry Gibb.”

“It set itself up to be harmonized so that it sounds like a typical wonderful ballad from the Great American Songbook. If you played it at a club, you could say ‘that came out in 1952′ and it would be believable.”

“I had that song on my iPod and I knew I couldn’t sing the words so we made it work as a B.B. King-ish instrumental or even Wes Montgomery meets the blues. Then Don Sebesky put the horns on there and made it happen.”

“We did it at our first session but it was too fast. We cut it slower, then put Harry Allen and my father on it. It’s a brilliant song.”

“’My Valentine’ really started this. Every time there was a break at rehearsals (for the GRAMMY week events) guitarist Anthony Wilson and I would play it as a bossa nova. At the GRAMMY rehearsal, Paul said, ‘I want to hear the samba version.’ When we were thinking about the project I knew I already had a vibe on that.”

“That’s based on a bass figure Ray Brown who used to play in a song called “Squatty Roo. ” [Bassist] Martin is the constant through the whole thing – he always knows where to put in a Ron Carter moment or where to sit on quarter notes. People gravitate toward what he’s doing.”

“I ran into a buddy of mine, Gary Haase, on the subway. He said, jokingly, ‘Have you heard from Sir Paul lately?’ As a matter of fact I had and he responded, ‘“Some People You Never Know” is a song you have to do.’ I thank him on the record.”

“I think of it like a rolling prayer. I play a Sondheimian figure – the chords are the same, but we add a little more life to it with that figure. There really wasn’t a lot to do harmony-wise.”