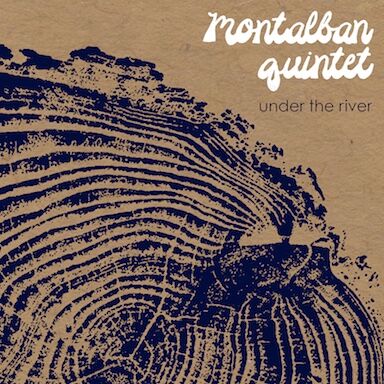 Following the release of Under the River, the new album from Pinback drummer Chris Prescott’s Montalban Quintet, the experimental ensemble has released a new video Swamis. The video comes on the heels of the album’s recent nomination for Best Jazz Album for the San Diego Music Awards.

The band also recently played to a sold out crowd at San Diego’s long-running Casbah celebrating that venue’s 30th anniversary and are currently working on an upcoming collaboration with the LITVAK Dance Company.

For Prescott (touring drummer for Pinback since 2005 and performer/contributor with Jimmy Eat World, Rocket from the Crypt and more), completing the new album after eight years of work caps a difficult and dark period resulting in a thrilling personal evolution.

For the Quintet, each time they take the stage is an element of risk. Yet the thrill of diving into landscapes where everything could as easily fall apart as coalesce remains the crucial spark that unites the longtime friends and collaborators. “Montalban Quintet is a place where I am completely honest in integrating the varied elements of my personality,” says Prescott of the San Diego-based ensemble that is a spiritual center for the disparate elements of his career (student, sideman, leader, engineer/producer, punk rock fan, jazz enthusiast).

Enlisted by Prescott to bring these slightly warped experimentations to life, Montalban members have chased the addictive freedom and creativity offered within the collaboration and its live shows. Performing and touring together at different points in Pinback over the past decade, Prescott (drums, vocals and additional guitar and piano) invited in Emmy award-winning composer Kenseth Thibideau (Sleeping People, Howard Hello, Tarentel) to hold down the bass and film and television composer Chris-Fulford-Brown to play keys. Next, having collaborated for almost 20 years with each of them, Julie Kitterman (percussion, vocals) and Greg Friedman (guitar, vocals) were natural additions. Montalban’s heavily featured and pivotal horn section is a product of a lifetime of discovering, exploring and making music with brother Carl Prescott (trumpet) and Carl’s proclaimed telepathic musical relationship with Jim Weiss (saxophones). Finally, Mike Stockalper (Mango Melody) was later pulled in to take on the majority of piano duties. Additional musicians on the album include Terrin Durfey (Bass, Vocals) of the iconic band Boilermaker and The Jade Shader, Marjorie Prescott (Cello), J.P. Hewett (Congas) and Pete Polansky (Violin).