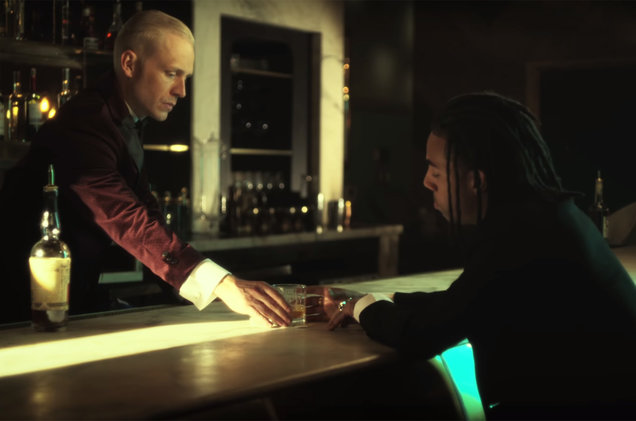 Mr Hudson on the “Coldplay” music video – “Here it is at last! I’m really proud of this. We managed to squeeze a whole movie into four minutes. Videos are often throwaway or a distraction from the song, but i believe this adds another layer of story to the song. I hope you feel the same way too. Jade Lorna Sullivan and Vic Mensa are rockstars as always. PS Let me know if you can spot any of the references to some classic films.”

First meeting in London in 2013, Hudson and Mensa’s admiration of one another developed finally into collaboration in early 2017. After performing in L.A. for the Celebrating David Bowie show, Mr. Hudson skipped the curtain call and headed straight to the Record Plant to work with Mensa on the latter’s track “Almost There,” released in June 2017.

Fast forward a few months to October and Mensa returns the favor, cutting a verse for Mr Hudson’s new single “Coldplay.” “For me “Coldplay” is about that moment when you’re about to give up on someone, but you don’t,” explains Hudson. “You dig deep. You keep working. Even though it might be easier to walk away.” He continues, “Vic’s verse is powerful. It’s more than a feature. He wears his heart on his sleeve. We’ve been friends for four years and we only just worked together! You can hear in our collaborations that we really wanted to add a lot to the records. Not all features are like that. Sonically, I love the jazz quartet on a space-station aesthetic. Sad-robot music. That’s my happy place.”

As a sought-after writer and producer Mr Hudson has been working writing for some of the biggest names in music including, Future, DJ Snake and others this year. Most recently, Hudson co-wrote two tracks with English singer JP Cooper including, “September Song” which went platinum in the UK and hit #6 on the UK singles chart resulting in over 260 million plays on Spotify. Mr. Hudson also scored the soundtrack for the 2017 anime short, Children of Ether.

Catch Mr Hudson in Los Angeles on Febuary 9th at The Echo.

About Mr Hudson
In 2008 after the release of Mr Hudson’s critically acclaimed album, A Tale Of Two Cities, he made a list of producers he’d like to work with for his follow-up album. Unexpectedly, Kanye West offered to sign Mr Hudson to West’s G.O.O.D. music and exec produce the album. Next thing Mr Hudson knew he was on a plane to Hawaii. “Before I got to America I was a reluctant collaborator but on the first day in Hawaii, Kanye said ‘I want you to help’ and I took that to heart and it stuck with me ever since. I just try to help in whatever context I’m in. It’s a good headspace.” In addition to Kanye, Mr Hudson soon began collaborating on a string of hits and #1 albums with Jay Z, Kid Cudi and Big Sean.