Rickenbacker Guitars – Out of the Frying Pan Into the Fireglo Written by Martin Kelly and Paul Kelly, published by Phantom Books 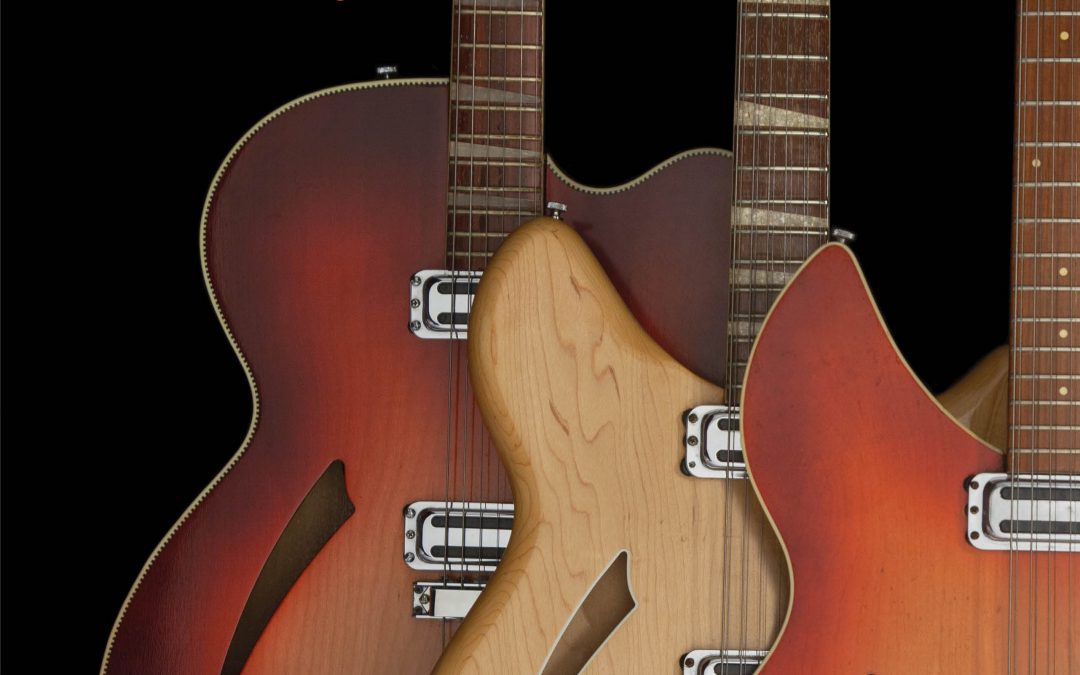 Rickenbacker Guitars – Out of the Frying Pan Into the Fireglo
Written by Martin Kelly and Paul Kelly, published by Phantom Books

Electric guitars are not simply just musical instruments. At their best they are iconic works of art – a marriage of form and function that has come to symbolise the very essence of 20th century pop culture. Marking what is also the 90th anniversary of the electric guitar, Rickenbacker Guitars – Out of the Frying Pan Into the Fireglo is a new book that explores the 90 year history of the company that invented the instrument, the guitar that defined the 60s, and would change popular music forever.

Back in 1964 The Beatles first appeared on The Ed Sullivan show, reportedly watched by an epic 73 million people – they performed with Rickenbacker guitars, making the brand instantly iconic. Authors Martin and Paul Kelly have travelled the world to gather over 350 original instruments, including all seven surviving Beatles-owned Rickenbackers, now beautifully photographed for the most comprehensive study on this unique marque.

Though Fender and Gibson are considered brand leaders in an industry that has provided the tools for millions of musicians around the world, Rickenbacker, a small family-run business, remains one of the most important musical instrument makers almost 100 years on. In addition to their pivotal role in the development of electric music, Rickenbacker guitars have also shaped the sound of bands as diverse as The Beatles, Rush, Motorhead, The Jam, Fugazi, The Byrds, Creedence Clearwater Revival, R.E.M, The Stone Roses, The Who and Yes.

The book details the fascinating story of how the electric guitar was created and developed in California during the early 1930s by George Beauchamp and Adolph Rickenbacker – and how, via unsung German born luthier Roger Rossmeisl, the company’s designs developed into some of the most iconic musical instruments ever made. New interviews with legendary Rickenbacker players including Roger McGuinn, Peter Buck, Susanna Hoffs, Johnny Marr, Mike Campbell, Geddy Lee, and Paul Weller intertwine with original commentary from John Lennon, George Harrison, Tom Petty and Lemmy to tell the fascinating story of Rickenbacker’s undying appeal.

Limited to just 800 copies worldwide the Super Deluxe set comes in a beautiful bespoke, embossed slip case that includes the 336 page book in a textured hard back cover with end papers signed and numbered by the authors. Unique to this set is a second 160 page book of Rickenbacker catalog reprints spanning 1933-1969 – impossibly rare artefacts reprinted in their entirety for the very first time. The slip case also includes an embossed card wallet that contains three specially produced posters. One that depicts all seven surviving Beatle Rickenbackers, a second featuring six famous 330 guitars played by Paul Weller during his time fronting The Jam, plus a replica 1960s shop poster. The Super Deluxe Edition of Rickenbacker Guitars – Out of the Frying Pan Into the Fireglo is one of the most lavish guitar titles ever produced.

Rickenbacker Guitars – Out of the Frying Pan Into the Fireglo is available in two special editions:
Standard Soft Back – priced at £35 ($47)
Limited edition Super Deluxe two volume set – priced at £175 ($235)

Initial orders can only be made via the Phantom Books website at www.phantombooks.com

Rickenbacker Guitars is the long anticipated follow-up to Martin and Paul Kelly’s groundbreaking Fender The Golden Age 1946-1970 first published by Cassell Illustrated in 2010 – a book that set new standards for a guitar related title and the first of its genre to be stocked in New York’s Museum Of Modern Art.

What the players say about the book:
Roger McGuinn of The Byrds: “The attention to detail is amazing! I’ve been playing Rickenbacker guitars for over 50 years and had heard some of the history but learned so much more from Rickenbacker Guitars – Out of the Frying Pan Into the Fireglo. Thanks for such a wonderful history of my favorite guitar!”

Susanna Hoffs of The Bangles: “There are few things more satisfying than the shimmer of an open chord played on a Rickenbacker through a Fender Deluxe Reverb amplifier. With Rickenbacker Guitars – Out of the Frying Pan Into the Fireglo, Martin and Paul have given us the definitive history of these magical instruments.”

Geddy Lee from Rush: “In 1967, I watched the Beatles make history by playing ‘All You Need Is Love’ live on television via satellite, and the entire time I was transfixed on the rather odd looking piece of 4 stringed furniture Paul McCartney held in his mitts. Of course, I know now, that it was a Rickenbacker 4001S Bass, and I’d have to wait until 1973 before my dream of owning one like it could come to fruition. As a favour to all lovers of musical instruments, Martin and Paul Kelly have combined art and information to create the definitive book about Rickenbacker in all its profound and quirky incarnations. It’s a joy to the eyes and is a must have reference guide to this fascinating and historic musical brand.”

Johnny Marr of The Smiths: “Knowing Martin and Paul Kelly’s perfectionism and attention to detail it’s no surprise that this is the ultimate and complete story of all things Rickenbacker.”

About Phantom Books
Founded by Martin and Paul Kelly and Phillip Hylander, Phantom Books is a brand new London based publishing house set up specifically with the aim of producing high quality titles on music and popular culture.