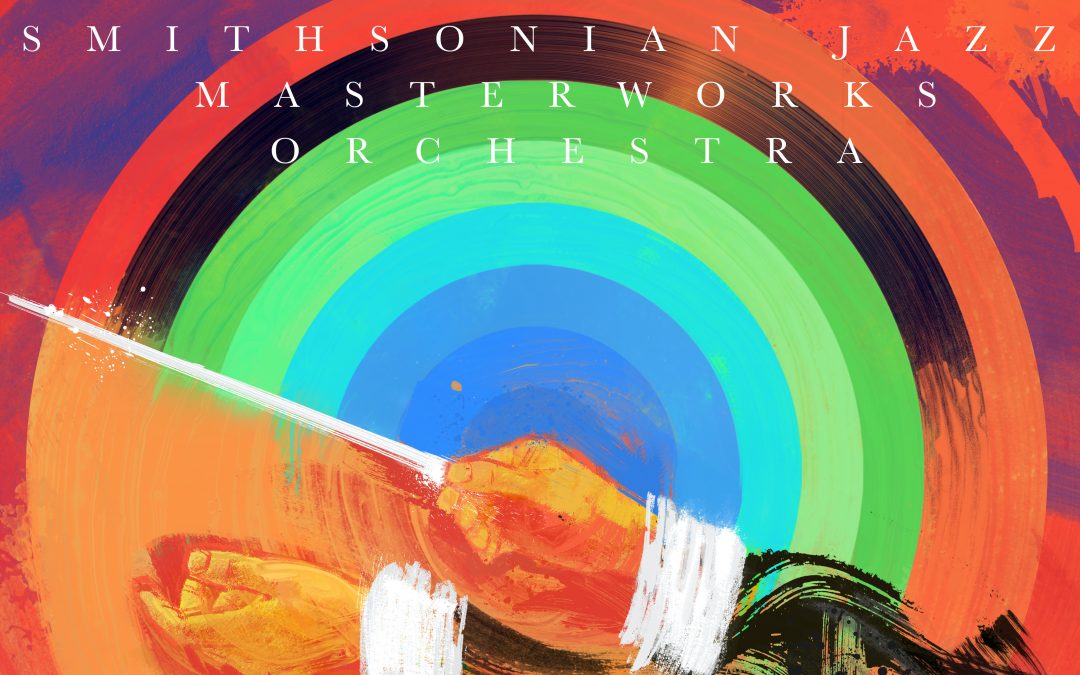 Bernstein Reimagined, due out January 29, 2021 via MCG Jazz, explores lesser-known Bernstein pieces through the transformative

Legendary composer Leonard Bernstein once called jazz “the ultimate common denominator of the American musical style.” The music made a profound impact on Bernstein’s work, not only in the more explicit “jazziness” of his work in musical theater, but throughout his “serious” orchestral music as well. Jazz artists in turn felt the influence of Bernstein’s innovations, with interpretations of his work recorded by such icons as Bill Evans, Dave Brubeck, Oscar Peterson, Wes Montgomery, Wayne Shorter and countless others.

With the stunning new album Bernstein Reimagined, the Smithsonian Jazz Masterworks Orchestra mines the composer’s vast repertoire for a vibrantly diverse new set of music that delves into pieces rarely if ever performed in a jazz context. Due out January 29, 2021 via MCG Jazz, this dazzling music was originally commissioned as part of the worldwide celebration of Bernstein’s centennial year in 2018.

“After a series of discussions with directors of artistic programs in Washington D.C. on the topic of ways in which to honor Bernstein’s centennial citywide, I imagined the Smithsonian Jazz Masterworks Orchestra presenting a grand concert of Bernstein’s music,” explains SJMO Artist Director and conductor Charlie Young. “Re-imagining Leonard Bernstein for this occasion required examining some of his compositions rarely associated with jazz. The resulting concert was a blast!”

The album features none of the usual suspects – the oft-explored West Side Story songs (“Maria,” “Somewhere”) or those that have become jazz standards (“Some Other Time,” “Big Stuff”). Instead, the project’s five inventive arrangers – Jay Ashby, Darryl Brenzel, Scott Silbert, Mike Tomaro and Steve Williams– find inspiration in the lesser known corners of Bernstein’s output: the symphonic works, spiritual music, operas, lesser-known musical theater pieces and even his sole film score, for the classic On the Waterfront. The results are, as the title promises, surprising acts of re-imagination as revelatory to Bernstein aficionados as they will be to newcomers unfamiliar with the original compositions.

“Bernstein led at least six different lives as an artist,” says Flavio Chamis, a Brazilian-born, Pittsburgh-based composer and conductor who was a personal friend and frequent assistant conductor for Bernstein during the last several years of the composer’s life.

“He was a conductor, a composer, a pianist, an educator and TV personality, a writer and a political figure. Even if you think about him solely as a composer, that spans symphonic music, Broadway musicals, opera, synagogue music, chamber music, solo piano, and so on. He’s impossible to define, but so is jazz; both are incredibly vast, so it makes sense to combine them to form a new vision.”

Chamis helped bring the arrangers’ attention to some of this less-explored pieces, hoping to shed light on Bernstein’s staggering diversity, especially for jazz audiences. It also follows in the spirit of Bernstein’s own singular reinventions. “As a conductor, Bernstein would often tweak classical pieces a little bit,” Chamis explains. “He might add an instrument to a Schumann symphony, for instance, to put his spin on the work of a composer. Now the Smithsonian is doing the same thing with Bernstein, who has joined the ranks of those classical composers, in a way.”

The album opens with the first of three pieces taken from the young Bernstein’s first Broadway show, On the Town (later made into a movie starring Frank Sinatra and Gene Kelly). Scott Silbert’s arrangement of “Times Square” brings that Manhattan landmark back in its pre-Disneyfied glory with an Ellingtonian vigor that embraces the tune’s rapid-fire shifts in tempo and dynamics.

Jay Ashby’s arrangement of “Dream with Me” revives a Bernstein piece cut from the original 1950 Broadway production of the play Peter Pan (with Boris Karloff as Captain Hook). Ashby transfers the song’s heartrending vocal melodies to a fluid alto sax nested in fluttering flutes and clarinets, making for a lovely, dream-like atmosphere. Another vocal piece reinterpreted for horns is Silbert’s jaunty “Morning Sun,” originally penned for the 1952 opera Trouble in Tahiti and later recycled in its 1983 sequel, A Quiet Place.

The latter is also the source for the “Postlude” that Mike Tomaro gives an exhilarating, tension-filled treatment that gives way to a hushed, tender ballad section underlying the soprano sax and piano solos.

One of the album’s most unexpected twists comes via one of its most obscure pieces. Taken from Divertimento for Orchestra, Bernstein’s contribution to the Boston Symphony Orchestra’s centennial celebration, “Waltz” escapes the Beantown winter for a Caribbean breeze, buoyed by a reggae groove and enlivened by the virtuoso steel pan playing of special guest Victor Provost. The entrancing guitar of MCG Jazz Executive Producer Marty Ashby takes the lead on Williams’ transformative arrangement of “Meditation #1” from Bernstein’s Mass, turning a somber prayer into an act of urgent exaltation.

“Everybody had to be on their A games to play this music,” recalls Ashby. “It was very challenging music to pull together and the fact that we were looking through the lens of five different arrangers gave it an especially wide palette. But the music really resonated with the band, and it was a lot of fun to play.”

Brenzel’s arrangement of “Chichester Psalms I,” commissioned by the Cathedral of Chichester in Sussex, England in 1965, finds the warm, joyful side of the original’s choral spirituality, making the elusive 7/4 rhythms seem effortless and embracing. The album ends with Silbert’s interpretation of a suite of themes from Elia Kazan’s on the Waterfront (famously starring Marlon Brando), which manages to be captivating and cinematic without the need for a single image.

“Well, maybe that’s really the difference between us,” Leonard Bernstein once told the iconic jazz bandleader and composer Duke Ellington. “You wrote symphonic jazz, and I wrote jazz symphonies.”

Chamis recalled those words as he summed up the strengths of Bernstein Reimagined. “This project falls directly between the two and becomes a third thing all its own, that sheds light on both. It’s very compelling music that reflects the broadness of Bernstein’s work, which is so open to many different ways of seeing.”

Bernstein Reimagined is available for pre-order beginning November 17, 2020 at www.mcgazz.org

Bernstein Reimagined on the web: