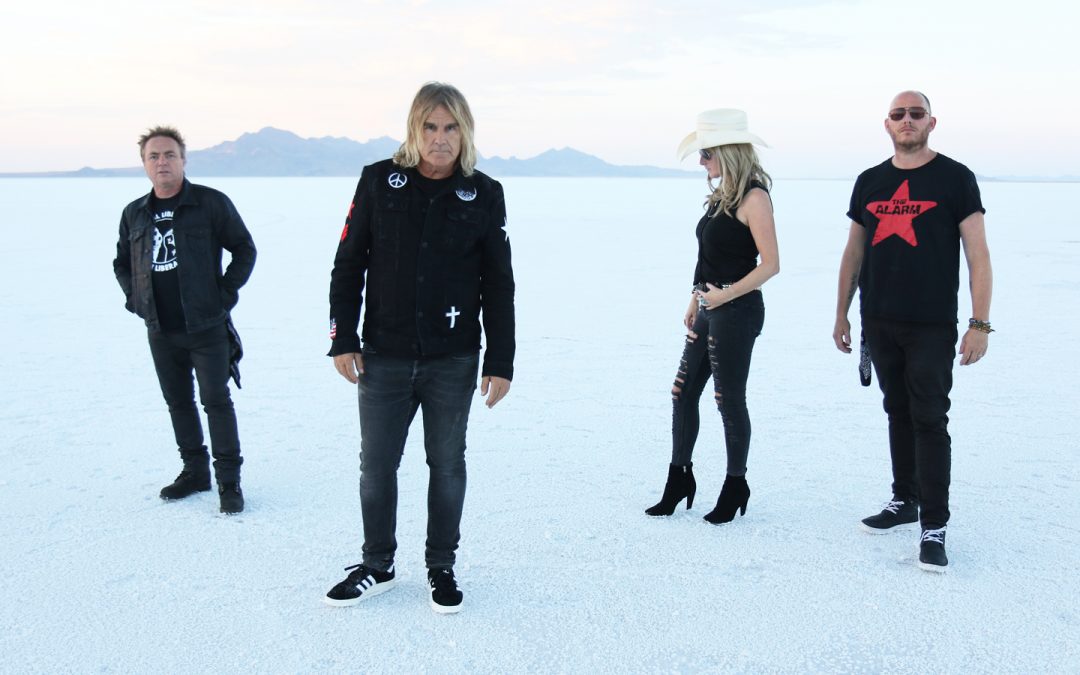 The Alarm announce the release of their new album EQUALS, out on 29 June, through The Twenty First Century Recording Company (manufactured and distributed by InGrooves).

EQUALS is The Alarm’s first album since 2010’s Direct Action. It is a barnstorming collection of 11 songs that act as a retrenchment of old values and a poignant reflection of the tough times Mike and his wife Jules have been through in recent years. Having recovered from lymph cancer in 1996, Mike was diagnosed with a rare form of leukemia in 2005 and, after an initial recovery, he suffered a relapse in 2015. To compound an already terrifying situation, Jules, who plays piano and sings backing vocals, was diagnosed with breast cancer just after. All band activity was put on hold as the pair underwent treatment and it is only now, with both in remission, that The Alarm are firing on all cylinders again. The emotional repercussions, though, are all too evident in the spirit of life-affirming optimism in the face of adversity that runs through EQUALS.

“The songs were built out of what I had become,”says Mike. “I learnt a lot about myself and my relationship with Jules, and it’s all there in the music. I didn’t set out to write about what we were going through. All I had were these incredibly strong feelings that I found myself putting into words and writing down onto my phone without even thinking they might form the basis for songs.”

To promote EQUALS, The Alarm are undertaking a 27 date North American summer tour, playing the new songs and reconnecting with fans both old and new. A resurgent 2017 saw the release of US documentary movie Man In The Camo Jacket and the BBC’s While We Still Have Time. The Alarm also took part in the Vans Warped Tour in the USA and recently made a debut appearance at Glastonbury, Carfest and Isle Of Wight Festivals in the UK. Songs from the band’s illustrious catalogue also feature in the soundtrack to Netflix sensational TV series 13 Reasons Why attracting over 1.75 million new listeners to The Alarm’s Spotify page.

Produced by George Williams (who previously worked on 2005’s Under Attack), EQUALS opens with a torrent of epic rock numbers such as Two Rivers and Beautiful, which see Peters singing about coming to terms with the past before moving to enjoy life to the full. With Mike and Jules joined by Joe Strummer & The Mescaleros drummer Smiley and guitarist James Stevenson, who cut his teeth with Chelsea, Gen X and The Cult, the album encompasses twin harmony guitars, pounding drums and electronic layering, while guest guitarist Billy Duffy (The Cult)helps Peters and Stevenson blend acoustic and electric sounds on Coming Backwards.

EQUALS is the latest chapter in an inspirational story that has seen The Alarm sell six million albums while clocking up 17 Top Fifty singles in the UK. Formed in 1981 in the Welsh seaside resort of Rhyl, the original band broke through on the back of the singles Unsafe Building, The Stand, Sixty Eight Guns and Where Were You Hiding When The Storm Broke?, their music a passionate blend of amped-up acoustic guitars, harmonica and Mike’s stirring voice. A string of successful albums saw them bracketed alongside U2, The Waterboys, Simple Minds and Big Country as part of Eighties rock’s distinctive Celtic fringe. After an emotional swansong at Brixton Academy in 1991, the original members went their separate ways, with Mike launching a solo career and joining forces with Billy Duffy in a short-lived band called Coloursøund.

The lingering allure of his old group proved hard to resist, however, and Peters entered a new millennium back at the helm of The Alarm. The group’s activities since that 1999 re-launch have included an ambitious album project, the Poppy Fields Bond, that saw them release five CDs in five months in 2003 and a ‘fake band’ escapade the following year in which they concealed their true identity by releasing a single, 45 RPM, as The Poppy Fields. They created a global news story when the song unexpectedly hit the UK charts.

Today, with Mike’s health now ‘back on an even keel’ and Jules in remission, The Alarm are looking forward to promoting Equals with characteristic vigour. Peters wouldn’t want it any other way. Not long after his second diagnosis, he founded a charity foundation, Love Hope Strength, and has since registered over 170,000 individuals to the International Bone Marrow Donor Registry. A man who refuses to be beaten, his drive in adversity is truly something special.

“The endgame of any creative period is always to share the results with an audience,” says Mike. “The turbulence of the last few years has shaken The Alarm’s world to its core but we have survived the challenges and are now ready for the next steps, which is performing the music live with our fans adding to the experience. Myself and the band are primed and ready to give everything we have to make this year a life affirming experience for all our fans.”

EQUALS will be available on CD, LP and on all digital download and streaming services

THE ALARM‘S 2018 North American tour dates are as follows: