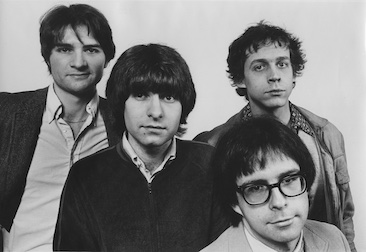 More than four decades after they left their hometown of Winston-Salem, NC to make music in New York City, The dB’s’ revered body of work still commands the loyalty of a fiercely dedicated fan base. Although The dB’s only released four studio albums during their original lifespan, their expansive alt-pop artistry has also been heard on various archival collections that document musical phases and evolutions beyond those heard on the band’s official releases.

The latest, and possibly most startling, of these compilations, is I Thought You Wanted to Know: 1978–1981. This set of 23 tracks of remastered early singles, demos, and live recordings will be released as a CD and as a two-LP vinyl set on October 15, on the new Propeller Sound Recordings label.

I Thought You Wanted to Know: 1978–1981 compiles rare and obscure material from The dB’s formative early days, shortly after the band’s classic original lineup—singer-songwriter-guitarists Peter Holsapple and Chris Stamey, bassist Gene Holder, and drummer Will Rigby—convened in the Big Apple and began developing the audaciously original pop-rock sensibility that would blossom on the band’s landmark first two albums, Stands for deciBels and Repercussion,released in 1981 and 1982 respectively.

I Thought You Wanted to Know: 1978–1981’s treasure trove of rarities includes such legendary dB’s obscurities as the title track (a collaboration with Television guitarist Richard Lloyd), “If and When,” “We Should Be in Bed”, “Ash,” “You Got It Wrong,” “Death Garage,” and “She’s Green I’m Blue.” Also featured are early versions of such future dB’s classics as “Bad Reputation,” “Black and White,” “Dynamite,” and “The Fight,” as well as the band’s distinctive covers of such vintage pop numbers as “Time Has Come Today,” “Let’s Live for Today,” “Tomorrow Never Knows,” and “My Back Pages.”

“What we have here are home and field recordings of the dB’s,” comments Holsapple, whose illuminating liner notes provide a vivid account of the band’s life and music during this chapter of its history. “Most of these tracks predate the release of Stands for deciBels by two to three years, and were the basis of the signing of the band to Albion Records UK in 1980.”

Although a handful of I Thought You Wanted to Know’s studio tracks previously surfaced on Rhino Records’ 1993 collection Ride the Wild Tom-Tom, many more are being released to the public for the first time—and all are appearing on LP for the first time ever.

“I think that I Thought You Wanted to Know shows an important phase of the band, the stuff we were playing when we first got together in New York that we honed our sound on,” Holsapple says, adding, “It was a great time to be young North Carolina transplants in a band in Manhattan, eyes wide open and charged with electric energy!”

For I Thought You Wanted to Know, dB’s founder Stamey, who’s emerged in the years since as a respected producer and resourceful engineer, managed to lend new sonic presence to the archival tracks, many of them primitively recorded on obsolete gear.

“The live recordings,” according to Holsapple, “were found after months of Chris sifting through a trove of ancient cassettes, and we are glad to be able to include these key songs from those early years.”

I Thought You Wanted to Know: 1978-1981 is the first in a projected series of dB’s releases on Propeller Sound Recordings, a new label founded by Jefferson Holt, longtime friend and confidant to the dB’s, and partner Jay Coyle. Coyle has spent the last decade helping artists direct their own releases by creating their own label structures. With Propeller, these two industry veterans have linked up to create a new label focused on serving artist communities in a new fan-focused approach to the indie label landscape.

According to Holsapple, “We’re hoping to present the entire catalog of the band to the modern listening public in improved editions that will feature lots of extras, and in formats like vinyl. It’s important to us to make sure that The dB’s’ recorded body of work get an esthetically appealing treatment that reflects its validity decades after it was originally released. We made these records to be played and played, so hopefully folks will need replacement copies by now!”