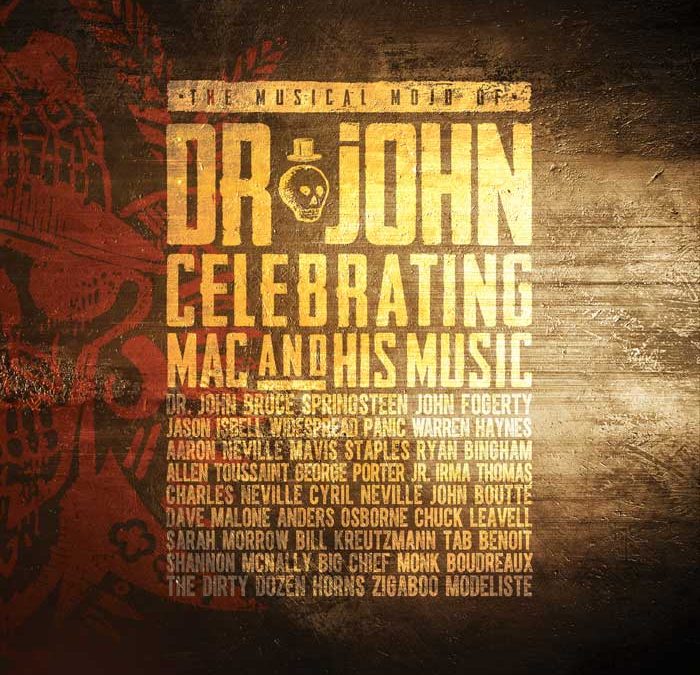 The Musical Mojo of Dr. John: A Celebration of Mac & His Music, produced by Blackbird Presents, released via Concord Records on October 14, 2016 and available for immediate pre-order

For Immediate Release – “It was very moving to have all these people paying tribute to me, but I just treated it like it was another show,” Rock and Roll Hall of Fame inductee and six-time GRAMMY®-winner Dr. John says of The Musical Mojo of Dr. John: A Celebration of Mac & His Music.

Scheduled for release on October 14, 2016 via Concord Records and available for immediate pre-order at http://celebratedrjohn.com, the expansive live tribute set, created and produced by Keith Wortman, CEO of Blackbird Presents, is a powerful testament to the far-ranging influence and indomitable musical spirit of the iconic New Orleans singer/pianist/guitarist. Encompassing a two-CD, Blu-ray and DVD package along with a stand-alone two-CD version, The Musical Mojo of Dr. John captures a star-studded concert at New Orleans’ Saenger Theatre, with Dr. John joined by a stunningly diverse assortment of notable guest artists, who perform 22 songs written, recorded and/or popularized by Dr. John during his prolific six-decade career, honoring his large and still-growing musical legacy.

The performers include Bruce Springsteen, who duets with Dr. John on the 1973 smash “Right Place Wrong Time”; Jason Isbell, who delivers a heartfelt “Blow Wind Blow”; John Fogerty, who performs the raucous Crescent City anthem “New Orleans”; Mavis Staples, who brings gospel fervor to “Lay My Burden Down”; Widespread Panic, who lend musical muscle to “Familiar Reality”; and Ryan Bingham, who delivers a haunting “Back by the River.”

Dr. John is New Orleans’ most prominent living musical icon. Through the embodiment of his hometown’s freewheeling creative spirit and multiple musical traditions, he’s built a visionary, idiosyncratic body of work that’s deeply rooted in the Crescent City’s myriad blues, R&B, jazz and rock ‘n’ roll traditions. That body of work stretches back to the 1950s, when Dr. John—then still known by his given name, Mac Rebennack—emerged as an in-demand producer, guitarist, pianist and songwriter on New Orleans’ studio scene, working for such local labels as Ace, Ron and Ric; collaborating with the likes of James Booker, Earl King, Professor Longhair, Art Neville and Frankie Ford; and scoring the regional solo hit “Storm Warning.”

In the early ’60s, he relocated to Los Angeles, where he played on countless sessions before debuting his flamboyant new musical persona, “Dr. John, The Night Tripper,” on his first solo album, 1968’s Gris-Gris, which introduced the world to his uniquely eclectic voodoo-funk. In the years since, he has remained a distinctly prolific and powerful force, releasing more than 30 albums of his own while collaborating with a broad array of acts including the Rolling Stones, Sonny & Cher, Van Morrison, Aretha Franklin, Gregg Allman, Mike Bloomfield, Levon Helm, Ringo Starr, Rickie Lee Jones, B.B. King and Christina Aguilera. He’s also performed in such films as The Last Waltz and Blues Brothers 2000, and pursued a successful two-decade songwriting partnership with legendary tunesmith Doc Pomus.

Dr. John was inducted into the Rock and Roll Hall of Fame in 2011, and won the most recent of his six GRAMMY® Awards in 2013 when Locked Down was voted that year’s Best Blues Album. He made his Concord debut in 2014 with Ske-Dat-De-Dat…The Spirit of Satch, a tribute to fellow New Orleanian Louis Armstrong. Dr. John co-produced the album with his longtime Nite Tripper band directress Sarah Morrow, who also arranged the album.

“I try not to look back too much, but it really moved me to have all of these people paying tribute,” Dr. John asserts. “But I want people to know that I’m still in the game and still have a lot more music in me.”