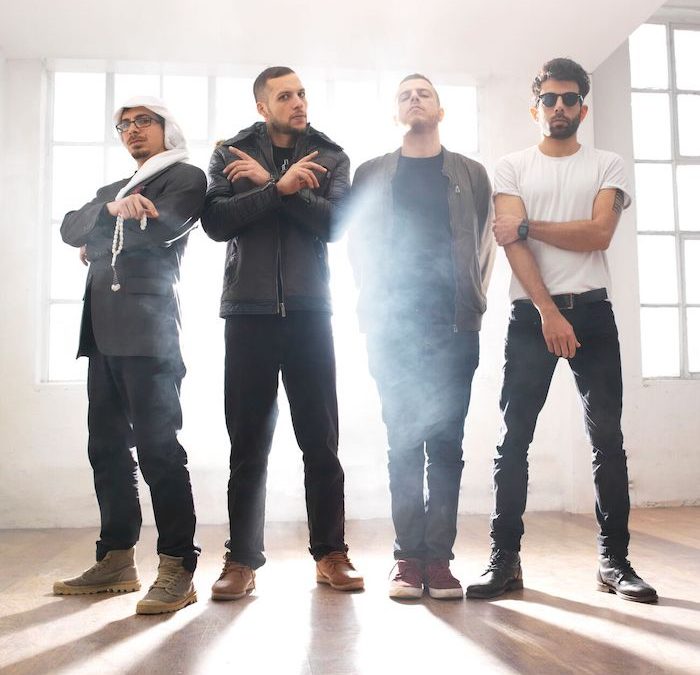 If you loved the frenzy of Omar Souleyman, 47 Soul should be your next stop. NPR – Best Songs of 2018

Following the late-2018 release of their debut album, Balfron Promise, Palestinian Shamstep band 47SOUL have been in high-demand. Performing their first U.S. concerts in January to sell out crowds in Chicago, Washington D.C. and New York, the quartet left critics and fans raving. To meet the increased demand the band has confirmed additional North American shows this March including SXSW, Canada, Brooklyn, New York and their first-ever shows on the west coast including Los Angeles and San Francisco.

47SOUL have become renowned for inventing their own genre Shamstep fusing dubby, synthie sounds with rock elements, hip-hop and pop lyrics in English and Arabic. The high-energy electronic creation, featuring Arab roots music (Dabke) have been kicked up a gear on Balfron Promise, with cinematic soundscapes and menacing rock undertones creating an extra atmospheric edge.

See below for what critics are saying and a full list of tour dates.

[Their] mix of dubbed-up reggae, rap and electrified Middle Eastern dabke is pretty much its own genre, know as “shamstep.” With a frame drum, darbuka, electric guitar and electronics, including a keyboard that alternately conjured snarling synth-bass and the traditional mijwiz reed flute, the band knew how to work a crowd, even breaking into some traditional dance steps. –ROLLING STONE

The members of 47SOUL are drawn from the Palestinian diaspora, but the group’s musical roots reach even wider, encompassing Middle Eastern dabke drumming, fuzzy synth beats and reggae to eminently danceable effect. Politics are never far from the surface in lyrics that speak of dispossession and in the label — “Shamstep” — the band has given its music, which voices dreams of Arab unity across the Levant. –THE NEW YORK TIMES

Musicians on a mission to spread positivity. –THE BOSTON GLOBE

ABOUT 47SOUL:
47SOUL is an Electro Arabic Dabke (Shamstep) band formed in Amman Jordan in 2013. The members are rooted in Bilad Al-Sham, spanning the divides from Amman to the Galilee to Ramallah and the rest of the Palestinian Diaspora. This new sound of 47SOUL has rapidly amassed fans in the Arab World, Europe, and around the globe by blasting the electric Arabic Dabke sound through alternative and street music scenes. On top of the beats that have been pumping in the Arab World for centuries, 47SOUL hypes it up with analog synthesizers, hypnotic guitar lines, group vocals, and melodic verses from the bands’ singers. Every show ends in relentless dance and trance from all audiences involved. Their lyrics, mixing Arabic and English, call to celebrate and advance the struggle for freedom and equality, inside Bilad Al Sham and throughout the world.