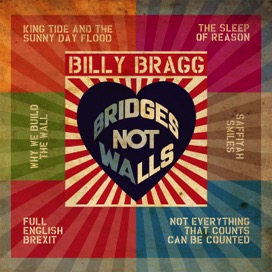 Listen to the new single/order the album here

Watch the video premiere of “Full English Brexit” via iNews

Read a recent interview with Bragg via Noisey

Billy Bragg, who is about to embark on the UK leg of his ‘Bridges Not Walls’ tour after selling out shows across the U.S., will release a new single ‘Full English Brexit’ this Friday Nov 3rd 2017 on the Cooking Vinyl label. The song is an elegant piano ballad that characterises the attitudes of an all too familiar ageing Little Englander, and follows hot on the heels of Billy’s previous single releases ‘The Sleep Of Reason,’ ‘King Tide And The Sunny Day Flood’, ‘Why We Build The Wall’ and ‘Saffiyah Smiles’ which were released in July, August, September and October respectively, and have gone down a storm on his recent live shows. The video to “Full English Brexit” will be premiered on the iNews website on Friday 3rd Nov. Previous videos available here.

On Friday Nov 3rd, the mini album, ‘Bridges Not Walls‘ will be released featuring all of the singles he has released over the summer.

Says Billy: “Life comes at you real fast these days. What’s a singer-songwriter to do when events keep challenging the way that we see the world? Before we’ve had a chance to digest one startling development, along comes another to throw us off balance again. I’ve been grubbing up songs for the past 12 months, but without the time to get an album together due to other projects, so in an effort to keep pace with these chaotic times I decided to start dropping tracks as they became ready across the summer culminating in a mini album. As always, they’re my way of trying to make some sense of what’s going on. And there’s been a lot going on.”