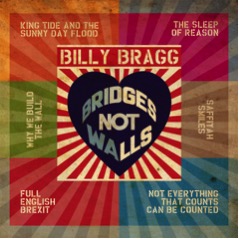 Listen to the new single / pre-order the album here:  https://BBragg.lnk.to/BNWAS


Watch the video premiere of ‘Saffiyah Smiles’ via NPR

“All round the world, people come together when Saffiyah smiles This is what solidarity looks like”

Billy Bragg, currently in North America for the first leg of his ‘Bridges Not Walls’ tour, will release a new single ‘Saffiyah Smiles’ on Oct 6th 2017 on the Cooking Vinyl label.  The song is a rousing Hammond-drenched country soul shuffle written by Bragg and was inspired by the bravery of Saffiyah Khan who smiled benignly in the face of the incensed leader of the far right group the English Defence League at an anti-immigrant demonstration in Birmingham (UK) in April ’17; a photo of her action immediately went viral on social media.  ‘Saffiyah Smiles’ follows hot on the heels of Billy’s previous single releases ‘The Sleep Of Reason,’ ‘King Tide And The Sunny Day Flood’ and ‘Why We Build The Wall’ which were released in July, August and September respectively, and have gone down a storm on his recent live shows.

On Friday Nov 3rd, the mini album, ‘Bridges Not Walls‘ will be released featuring all of the singles he has released over the summer plus two other gems that stand shoulder to shoulder with every song Billy has written in his 30 year career on the frontline.

Billy – ‘Saffiyah Smiles’: “‘Following the shocking scenes of white supremacists marching through the streets of Charlottesville this past summer, my mind went back to an image of a young woman facing down a ranting fascist with nothing but a serene smile. Saffiyah Khan had been taking part in a counter demonstration against the neo-fascist English Defence League in Birmingham, England, in April this year when she saw a woman being surrounded by taunting EDL supporters Saria Zafar was targeted because she was wearing a hijab and when the police failed to act, Saffiyah stepped up and got in the face of the loudest aggressor, holding him at bay with nothing more than a smile until police eventually intervened. A press photographer captured the moment and the picture went viral. Local Labour MP Jess Phillips memorably tweeted the image with the caption “Who looks like they have the power here?” Saffiyah Khan’s selfless act of solidarity is an inspiration to us all and a reminder that sometimes you can confront hatred by calmly making plain how ridiculous its propagators are.

Billy –‘Bridges Not Walls’: “Life comes at you real fast these days. What’s a singer-songwriter to do when events keep challenging the way that we see the world? Before we’ve had a chance to digest one startling development, along comes another to throw us off balance again. I’ve been grubbing up songs for the past 12 months, but without the time to get an album together due to other projects, so in an effort to keep pace with these chaotic times I decided to start dropping tracks as they became ready across the summer culminating in a mini album. As always, they’re my way of trying to make some sense of what’s going on. And there’s been a lot going on.”