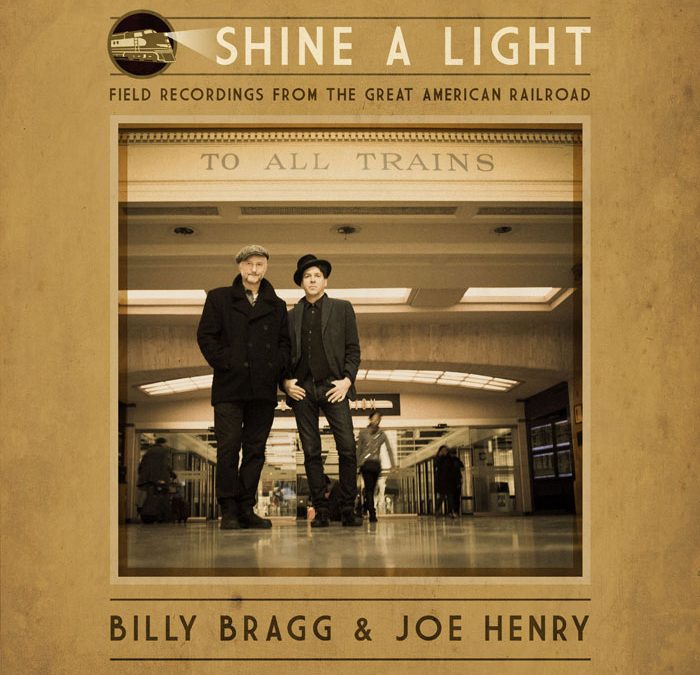 Click Here For Video And Full Commentary From Bragg And Henry

In March 2016 singers Billy Bragg and Joe Henry, guitars in hand, boarded a Los Angeles-bound train at Chicago’s Union Station with the hope of reconnecting with the culture of American railroad travel and the songs it inspired. Winding along 2,728 miles of track, the pair recorded songs while the train paused to pick up passengers. In waiting rooms and at the track side in St Louis, Fort Worth, San Antonio, Alpine TX, El Paso and Tucson they hurriedly set up their recording equipment, performing classic railroad songs while keeping one eye on the train, bounding back aboard just before pulling out for the next town. After four days crossing the country, they pulled into Los Angeles at 4:30am, recording their final song in Union Station at dawn, just as the first birds began to sing.

The resulting album Shine A Light: Field Recordings From The Great American Railroad takes listeners along on that journey and will be released September 23 on Cooking Vinyl Records. The album features the perfectly matched voices of Bragg and Henry and captures the varied atmospheres and environments in which they recorded—from the close proximity of soft-furnished sleeping cars to cathedral-like ambience of waiting halls built to hold thousands of passengers. Containing thirteen songs originally recorded by legendary singers such as Lead Belly, Hank Williams, Jimmie Rodgers and more, the album reveals an often forgotten but integral part of America’s musical heritage.

“Railroad songs provided the bedrock of American popular music, from Jimmie Rodgers, the Singing Brakeman, to Lead Belly, whose repertoire provided several of the songs for this project,” say Bragg. “In my country, Lonnie Donegan’s 1956 hit ‘Rock Island Line’ sparked the skiffle craze, inspiring a generation of British teens to pick up guitars and form the groups that invaded American in the 60s, from the Beatles to Led Zeppelin. Growing up in the UK, I’d always been aware of this tradition but when I traveled to the US, I was surprised to find how few people look to the railroad as a means of transport. With this project, we wanted to explore the transformative power that the coming of the railroad had on the lives of ordinary people by taking these songs back to the places that inspired their creation. Traveling on the train and recording the songs as we went allowed us to both visit places that were important 125 years ago when the lines were laid, but to also explore the viability of the railroad as a means of transport in the 21st century.”

“The emergence of the railroad in America boasted of our might and sprawling enormity, yet signaled a deep desire for close community; connectivity,” adds Henry. “The songs that grew out of and alongside this innovation remain to tell this story of collective national character.”

Henry and Bragg most recently worked together when Henry produced Bragg’s highly acclaimed 2013 album Tooth & Nail. The duo will tour together, performing songs from Shine A Light and more, later this year. Full tour details to be announced soon.

Track Listing for Shine A Light…