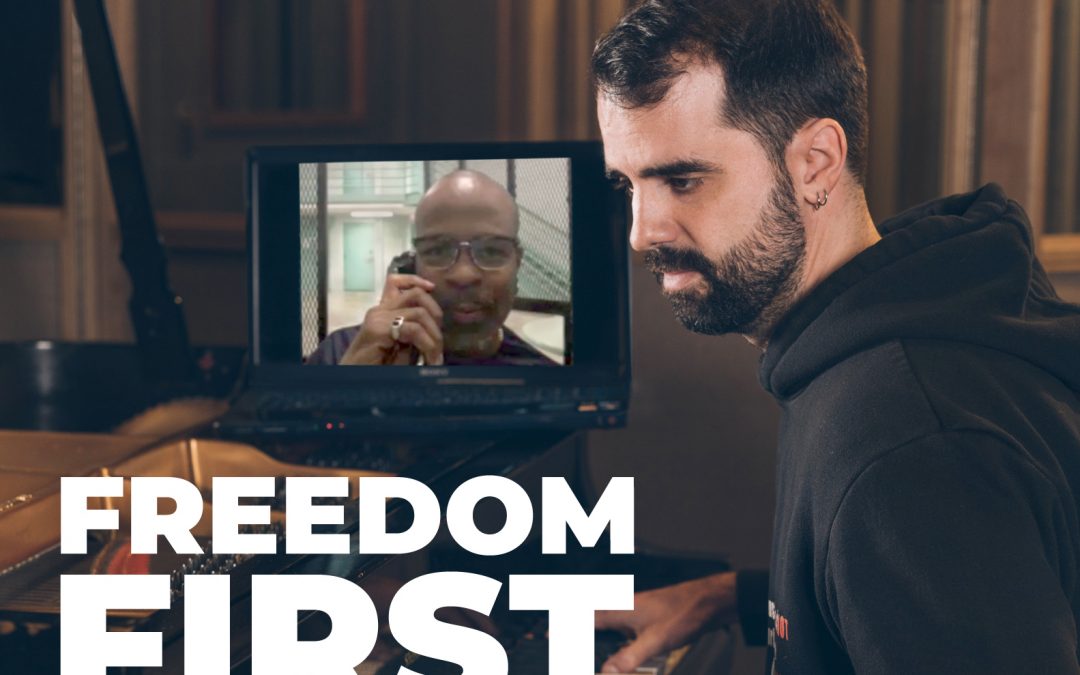 Cleveland-born poet, writer, and activist Keith LaMar, 52, has spent the last year hard at work writing and performing new material for his first album, FREEDOM FIRST…from his cell at the Ohio State Penitentiary, where he has spent over 28 years in solitary confinement on death row for a crime he didn’t commit.

A collaboration with Brooklyn-based, Catalan pianist and composer Albert Marquès, FREEDOM FIRST is the first album in history by an artist on death row. LaMar is scheduled to be executed by the State of Ohio on November 16, 2023.

FREEDOM FIRST began in 2020 as a concert series involving dozens of musicians on the streets of New York during the Black Lives Matter protests following the murders of George Floyd and Breonna Taylor, playing the jazz tunes that helped LaMar survive these long decades in solitary, including him speaking live by telephone between songs. In the album’s first track, “Calling All Souls,” LaMar says “The music you are about to listen to comes out of the realm of the impossible, something that, in reality, should not have been doable. Whether or not I am successful in stopping these people from killing me, you are right now listening to my last will and testament, the embodiment of everything I’ve endured, learned, and conquered.”

It was jazz that kept LaMar from losing his mind in prison. “John Coltrane saved my life,” LaMar said. “Had it not been for ‘A Love Supreme’ I’m sure I would have lost myself. I listened to it every day, and it rewired something in me, changed the circuitry of my brain and opened me up in a way that allowed me to view things (most especially myself) through a broader lens. I needed that, to free my mind, in order to keep living and breathing.”

Marquès recounts, “I came up with the idea for a Freedom First concert after listening to Brian Jackson and Keith LaMar’s podcast, ‘Pieces of a Man.’ I was electrified by Keith and the conversations they had about humanity, life, race, being a Black man in America, prison, and especially jazz. It was clear that any concert for Keith would have to involve his most treasured tunes, and Keith himself. I didn’t want to speak for Keith, I wanted to create a stage for him to use his own voice to fight for his life.”

LaMar was sentenced to death in the aftermath of the 11-day 1993 Lucasville Prison Uprising, when the State of Ohio found itself under public pressure to clean up the multi-million dollar mess. The State Highway Patrol had contaminated all the evidence by trampling through the crime scene, so prosecutors developed a strategy to reward jailhouse informants to implicate LaMar for the deaths of fellow inmates. To secure his conviction, they withheld statements that would have proven his innocence, including confessions from the actual perpetrators. LaMar’s trial took place in a remote Ohio community with an all-white jury, who swiftly sentenced him to death. He has been fighting for decades to prove his innocence in court.

Marquès is a pianist, composer, and political activist from a working class, industrial town outside of Barcelona, where he worked in factories through school. A member of a Catalan anti-capitalist organization as a teenager, he was musically influenced by the local punk scene, as well as jazz recordings of musicians like Chick Corea, Brad Mehldau, Michel Camilo and Herbie Hancock. Self-taught until he attended Conservatori Superior de Música del Liceu in Barcelona, he moved to Paris after graduation where he played with many artists while working at McDonald’s. It was in New York that he finally combined his biggest influences: contemporary jazz, flamenco, Afro Cuban music and social justice by creating FREEDOM FIRST with LaMar.

The first single from the album is “Tell ‘Em the Truth,” the only song on FREEDOM FIRST in which LaMar was able to perform live with the band via video call, a feat in itself that required surmounting many technical and logistical challenges. It was also their first collaboration with both original music and lyrics.

Recorded in Brooklyn, NY on May 8th, 2021, “Tell ‘Em the Truth,” features Marquès on piano, Adam O’Farrill on trumpet, Zack O’Farrill on drums, Walter Stinson on bass, Xavier Del Castillo on tenor saxophone and Patricia Brennan on vibraphone. For weeks before the recording, Marquès played the composition for LaMar over the phone as they rehearsed. The tune starts with an ostinato by the piano and vibraphone that repeats throughout the piece, evolving into a compelling ballad played by the sextet.

The logistics involved in making this album were incredibly challenging. Some tunes like “On Living” started with Keith recording the poetry by phone, to which Marquès would compose the music. For “Be Free,” it was the opposite: LaMar wrote and recorded his part in response to Marquès’ composition. Marquès visited LaMar at the Ohio State Penitentiary for the first time on June 6th, 2021. This is a collaboration between two artists and friends who have talked by phone or email every day for the past two years.

Since the beginning, FREEDOM FIRST has inspired support from Marquès’ colleagues and community. The three concerts on the streets of New York each gathered 25 musicians, playing for free. Marquès invited his mentors O’Farrill and Nathanson to compose new songs for the album. Nathanson produced and composed “No Man’s Land,” the only song in which LaMar sings, accompanied by Nathanson on saxophone and alternative soul/R&B star Nick Hakim on vocals. The legendary Brian Jackson, known for his collaborations with Gil Scott-Heron, wrote and performed “The Only Freedom.” Samora Pinderhughes wrote “Samora’s Interlude for Keith” for LaMar after their long conversations together. FREEDOM FIRST ends with O’Farrill’s soulful, spiritual composition “The Drowned and The Saved” that incorporates the gospel song “Were you there (when they crucified my lord).” All of them have a personal relationship with Keith LaMar.

Through music, FREEDOM FIRST invites listeners into LaMar’s tragic yet ultimately hopeful story, allowing us to accompany him on his journey through “the depths of hell” to a place of even deeper meaning, self-knowledge and a pure appreciation of life itself.

“This isn’t just an album; it’s my life. It’s everything that has sought to destroy me, and everything that I have done in order not to be destroyed. It’s the mechanism through which I found meaning, through which I discovered what is most valuable in this life. Music is the means by which I was able to establish a sense of connectedness to the world, to other human beings, and, ultimately, to god,” said LaMar.

Together as dear friends, artistic collaborators and spiritual brothers, Marquès and LaMar have created a truly timely, groundbreaking and moving album with revolutionary spirit.

“This album is about reestablishing one’s humanity and learning how to communicate across superficial barriers and finding the common ground on which we can negotiate a lasting peace,” says LaMar. “Of course, I don’t mean to suggest that one album has the potential to affect something so monumental, but it’s an iron in the fire of humanity, and my hope is that it will somehow fuse with the other fires that are already burning and turn into a conscious conflagration. As Albert would say: Why not?”