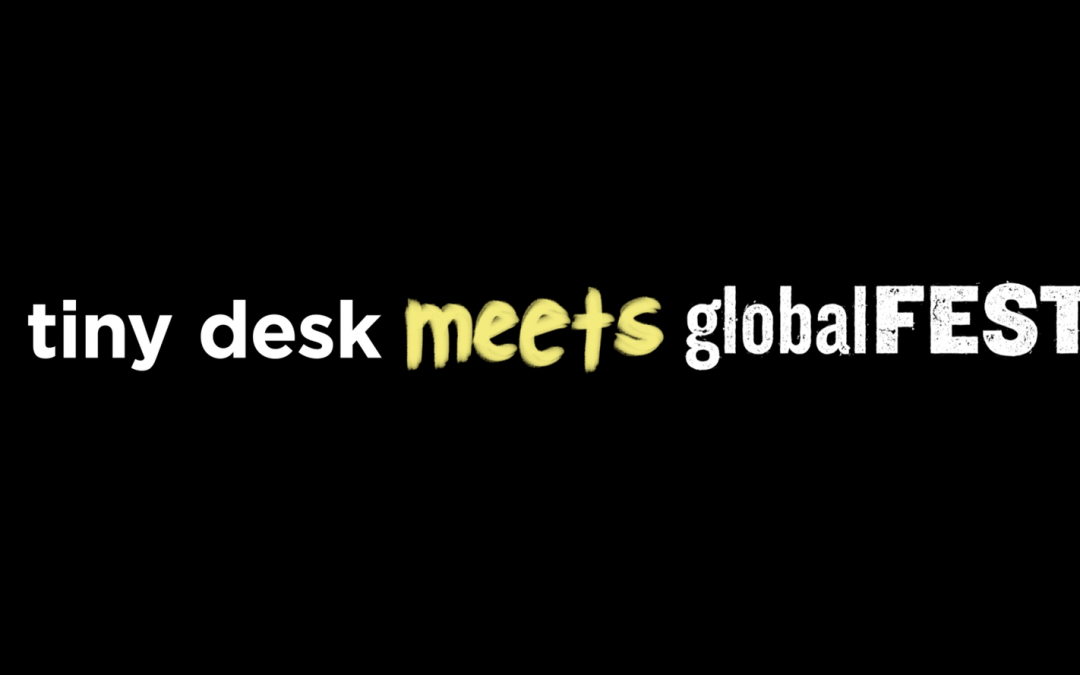 Facing dual challenges of the pandemic, along with hardening of international borders, globalFEST will, for the first time, team with NPR Music’s Tiny Desk concerts to present exclusive video performances by 16 artists via NPR Music’s digital platforms, in a series entitled NPR Music’s Tiny Desk meets globalFEST. Featuring 12 new artists, as well as 4 yet to be announced globalFEST alums, the four night series will be hosted by African superstar Angélique Kidjo, who performed at the inaugural edition of globalFEST in 2004. Watch the premiere January 11 at 8pm EST on NPR Music’s YouTube page.

globalFEST’s joyous gatherings have seen artists from around the world gain footholds with U.S. audiences and enhance their ability to tour professionally around the world. Notable artists that first gained notoriety performing at the festival include Rokia Traoré, Carolina Chocolate Drops, Antibalas, Mariza, DakhaBrakha, Red Baraat and others. The festival has also paved the way for several other festivals all of which coalesced around the theme of blending audiences of performing arts, industry decision makers and fans in the same venues coinciding with the annual APAP and ISPA conferences, such as Winter Jazzfest, Under the Radar and Prototype, to name a few. These events have now coalesced under an umbrella initiative known as JanArtsNYC, presented in partnership with the New York City Mayor’s Office of Media and Entertainment.

“globalFEST was founded in the early 2000’s as xenophobia was rising post 9-11,” says co-directors Bill Bragin, Isabel Soffer, and Shanta Thake. “We’ve always had to contend with the vagaries of visa policy, and the fact that presenters in the U.S. and artists from abroad need to work against bureaucratic and financial obstacles in order to share their art for the benefit of American audiences. It’s more urgent than ever to push to retain global perspectives amidst an increasingly isolationist world, where the pandemic is just another obstacle that makes our collective work harder. With Tiny Desk meets globalFEST scheduled for the week before the inauguration of President-elect Biden and Vice President-elect Harris, this is a perfect opportunity to celebrate cultural diversity and our global interconnectedness.”

“Since the early 2000s, globalFEST has been my high point for uncovering new music from around the world. The annual NYC gathering inspired me to bring many of my discoveries to the Tiny Desk,” said Bob Boilen, creator of NPR Music’s Tiny Desk series. “Korea’s SsingSsing, the Palestinian electronics of 47Soul, and Jamaica’s Brushy One String have been a few stellar discoveries. And though we can’t gather together in a club this year, I’m thrilled that team globalFEST will bring new remarkable talents to our Tiny Desk (home) concert series, and we can all celebrate the joys of these expansive talents together.”

Since the launch of the Tiny Desk concert series in 2008, more than 900 performances have been recorded at the Tiny Desk — Bob Boilen’s festive workspace at NPR headquarters — which is adorned with years of music mementos and memorabilia. Tiny Desk concerts attract more than 7.5 million viewers each month and continue to unify a passionate community around the love of music discovery. The series has provided a unique stage for artists across genres and at every phase of their careers. In response to social distancing measures, the series has pivoted to Tiny Desk (home) concerts. It’s the same stripped-down sets in an intimate setting that provides a unique glimpse into the creative space of artists.

The 2021 lineup was curated by Thake, Soffer, and Bragin, along with this year’s guest curator, Viviana Benitez. In addition to the artists announced, Tiny Desk meets globalFEST will also reconnect with its past artists, and include 4 illustrious alumni of previous editions to be announced later.

Over the last two decades, globalFEST has become one of the most dynamic global music platforms in North America, growing from an acclaimed festival/showcase into a catalytic non-profit service organization for curators, artists, and the performing arts field. Programs include: the gF Touring Fund, which provides direct support to artists to develop new markets and audiences; gF On the Road, tours that bring creatively programmed lineups to venues nationwide; and guest curating for both commercial and performing arts settings, including such influential events as SXSW, Bonnaroo, Lincoln Center and beyond, that serve to raise the profile and visibility of the artists gF works with, and world music overall. In 2018, globalFEST was awarded the APAP William Dawson Award for Programmatic Excellence and sustained achievement in programming. In 2021, globalFEST will establish a new sustaining fundraising model inviting supporters to join in globalFEST’s efforts in an ongoing fashion. Connect with globalFEST via Website, Facebook, Instagram and Spotify.

Acclaimed for his powerful, emotive voice, Aditya Prakash is among the foremost virtuosos of South India’s Carnatic tradition — which he reimagines in a fresh, dynamic dialogue with jazz and hip hop, featuring his masterful and diverse L.A. ensemble. Twitter – Instagram – Facebook

The Dedicated Men of Zion came up out of the singing land of eastern North Carolina, around the city of Greenville and its small neighboring town of Farmville. Each trained in the church and the home, the group’s four vocalists – Anthony Daniels, Antwan Daniels, Dexter Weaver, and Marcus Sugg – share the bond of that upbringing and another more literal bond of kinship (they’re all family now through blood or marriage). Twitter – Instagram – Facebook

Composer and vocalist Edwin Perez specializes in socially conscious salsa dura. Growing up in Caguas, Puerto Rico, he moved to the Bronx, New York City at the age of 18 and began to sing with Cuban bands and small ensembles like that of Enrique Lopez. In 2004 Perez became a founding member, composer and lead singer of gF alums La Excelencia, where his vocals headlined three albums until they disbanded in 2012. In 2013, Edwin founded and produced his new salsa dura project Orquesta SCC. After touring 52 countries and gaining worldwide acclaim, Perez decided to release his first solo album La Voz del Pueblo under his own label in 2017. At the start of 2020, Perez released Street Corner Chronicles which has topped the Latin charts and has been nominated for multiple awards. Edwin Perez vocals have also been featured in the blockbuster film ’16 Blocks’, the hit TV show; ‘So You Think You Can Dance’, Paul Simon’s Broadway play; The Capeman, Zumba fitness exercise program, and back-up vocals for the salsa legend; Eddie Palmieri. Instagram – Facebook

Through myriad projects, director, composer, singer-songwriter and activist Elisapie has established herself as a true Inuit icon. She was first discovered in 2003 as the director of her documentary If the Weather Permits, a film which thrust viewers into her own origin story. The following year, she released her first album with the duo Taima, winning a Juno Award for Indigenous Music Album of the Year. She has since released three solo albums, There Will be Stars (2009) and Travelling Love (2013) and The Ballad of the Runaway Girl (2018). She was shortlisted at Polaris prize, won multiple awards and played the famous Tiny Desk sessions. Today, she is one of the main voices and advocates of the indigenous culture in Canada. Instagram – Facebook

Hit La Rosa delivers surf-punk transmissions from Lima of a phantasmagoric cumbia world, channeling Peruvian highlands’ rhythms (huayno) and Amazonian psychedelia. By turns precise and dreamy, Hit La Rosa is a Peruvian tropical music project which plumbs pop music, folklore, jazz, and dancehall to produce its distinctive grooves and hooks. Add to this a punk sensibility designed to, as lead singer and primary lyricist Chaska Paucar puts it, “bring healing to people,” by exploring, not shunning, life’s shadowy sides. Formed in 2013, they explore the journey of Peruvian cumbia, inspired by the sound of the first electric guitars that ventured into the iconic tradition. Instagram – Facebook

Discover the beauty and the richness of the music of LABESS band, which means “everything is fine” in Arabic. The group brilliantly fused gipsy rumba, flamenco and traditional North-Africa music rhythms such as gnawa and chaabi. By singing in Arabic, his mother language, in French or Spanish, Nedjim Bouizzoul tells with his expressive voice histories full of authenticity, mixing realism and hope, gentleness and fury. He sings about exile, telling us about the joys and the distress that punctuate the road from the native country to the welcoming country, and vice-versa. Through his poetry, he proposes a reflection (about) on cultural diversity and the necessity to be all united, no matter our differences. Instagram – Facebook

Minyo Crusaders debut album “Echoes of Japan” marks the arrival of a big band like no other, where distinctive min’yō vocals glide over grooves that join the dots between cumbia, Ethiopian jazz, Thai pop, Afro-funk and reggae. Originally sung by Japanese fishermen, coal miners and sumo wrestlers hundreds of years ago, the crusaders are on a mission to make these folk songs popular again –this time for an international audience. Twitter – Instagram – Facebook

Hailing from Guinea, Natu Camara is one of its brightest musical stars and a committed activist for the empowerment and education of girls and women in west Africa. Along with her multinational band in NY, she brings a fresh new sound to us with Dimedi (which means Child in her native language, Sousous). In the early 2000s, Camara led West Africa’s first all-female hip-hop group, the Ideal Black Girls (IBG). Years after releasing Guinèya Moumonèra (It’s Not a Shame to Be a Woman) — a multi-platinum opus advocating for women’s rights — as a member of IBG, the dynamism of Camara’s musical evolution is revealed. Singing in five languages, Dimedi showcases Camara’s unique blend of afro-rock, pop, and soul that speaks to the range of heroes influencing her individual sound: Miriam Makeba, Nina Simone, Fela Kuti, Baaba Maal and Tina Turner.

As a builder of bridges socially and culturally, Camara’s musical compositions are powerfully constructed to bridge the global gap and bring people together in a captivating blend weaving a beautiful tapestry of musical stories and visions of her beloved home. Natu’s foundation supports local organizations to mentor and empower young girls and support education as a tool to reduce poverty in Guinea. She finds a way to speak to the silent minority through her music. Twitter – Instagram – Facebook

Nora Brown plays traditional Appalachian music. She started learning uke at age 6 from the late Shlomo Pestcoe. With a focus on old-time music Shlomo laid a foundation of love of music and the community it creates. He instilled in her the lesson that music is meant to be shared. Now 14 years old, Nora plays banjo and sings ballads – solo and with many of her mentors including her friend, fiddler Stephanie Coleman, as a duet under the name Little Leatherwood. Jalopy Records released Nora’s first album Cinnamon Tree produced by Alice Gerrard. Instagram – Facebook

Rachele Andrioli measures herself with singing, spacing in between traditional music and the role of the chansonnier, from music rooted in Salento to world music, to jazz. She started off collaborating over several years with “Officina Zoè”, one of the first and somehow most radical expressions of music from Salento, Puglia in Southern Italy. Together with the band, she participated in important festivals inside and outside national borders. Her musical journey continues, ranging from Italy to India, Lebanon and the Americas. The artist features in several discographic productions. In her musical research, she never forgot her Latin soul, open to modern influences and mindful of her Mediterranean roots. Facebook

Vox Sambou comes from Limbe, Haiti. He writes and performs in Haitian-Creole, French, English, Spanish and Portuguese. A founding member of Montreal-based hip-hop collective, Nomadic Massive, he performed across North America and the world. His music is a fusion of traditional rhythms of Haiti and Afro-Latin elements on Afrobeat, reggae, and hip-hop. Vox Sambou is a committed musician who is not afraid to denounce injustice, social imbalances, and inequities. He is crucially involved in the achievement of educational and community projects based in Limbe, Haiti and is a founding member for a long-term solidarity between Montreal and movements fighting for social justice in Haiti, according to the principles of self-sufficiency, education, decentralization, and reforestation. Instagram – Facebook