NEW WEBSITE LAUNCHED TO HONOR THE LEGACY OF IRVING BERLIN 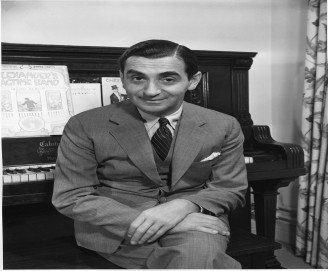 January 18th, 2018 – The family of Irving Berlin, in conjunction with his publishers Concord Music (North America) and Universal Music Publishing Group (rest of World), today announced the launch of a new website to honor the seminal musician in celebration of his 130th birthday. Created to pay tribute to Irving Berlin’s life and legendary works, this is the first time a dedicated digital resource has existed online for the man epitomized by Jerome Kern’s famous maxim: “Irving Berlin has no place in American music – he is American music.”

The website’s features include:

– Commissioned detailed history of Irving Berlin’s life, including: his great romance and 62-year marriage to Ellin Mackay – the billionaire’s daughter who defied her father to marry Irving Berlin and who went on to become an impressive novelist; his glittering career writing popular music, and numerous Broadway and Hollywood scores; his ground breaking all-solider cast production ‘This Is The Army’ that helped raise both money and morale during World War II.
– ‘Behind the Songs’, a section exploring the stories behind some of Irving Berlin’s best loved tracks, such as “Alexander’s Ragtime Band” and “White Christmas” – featuring exclusive excerpts from The Complete Lyrics of Irving Berlin (edited by Robert Kimball and Linda Emmet, one of Irving Berlin’s daughters.)
– Collection of fascinating photographs spanning Irving Berlin’s life – from pictures with some of the many stars he worked and associated with (Ethel Merman, Fred Astaire, Ginger Rogers, Judy Garland and Marilyn Monroe, to name just a few), to more intimate family shots which have never before been available online.
– Numerous curated Spotify playlists for fans to explore his extensive catalog, as well as introduce new listeners around the world to Irving Berlin’s biggest hits and lesser-known gems.
– Comprehensive resource for information on his film and theatre work.
– Showcase of books, albums and sheet music available to purchase.

Irving Berlin’s incredible songbook remains deeply engrained in the current musical landscape of the US, UK and beyond. Contemporary pop artists who have given their own stamp to his work include Lady Gaga, Bob Dylan,Gregory Porter, Rufus Wainwright, Billie Marten, Herb Alpert, Leonard Cohen, Paul McCartney, Michael Bublé, Lily Frost, Sarah McLachlan and most recently Gwen Stefani on her 2017 Christmas album.

His music continues to be widely featured in films, commercials and television shows. Lady Gaga sang “God Bless America” at 2017’s Super Bowl Halftime Show, whilst Seth MacFarlane covered “Let’s Face the Music and Dance” for animated movie Sing. Ad spots include Perry Como’s cover of “It’s A Lovely Day Today” for McDonalds (UK 2017) and Gregory Porter’s brilliant version of “Puttin’ on the Ritz” for Ritz crackers (UK 2015). His songs also frequently appear in popular TV shows, including the most recent series of America’s Got Talent and BBC’s Strictly Come Dancing. On stage, Holiday Inn had a successful run on Broadway in 2016, and a film of the stage production was recently shown in cinemas across the US and broadcast on PBS.

Over five decades, Irving Berlin produced an outpouring of ballads, dance numbers, novelty tunes and love songs that defined American popular song for much of the century: “Alexander’s Ragtime Band,” “How Deep Is The Ocean (How High is the Sky),” ” “Blue Skies,” “White Christmas,” “Always,” “Anything You Can Do,” “There’s No Business Like Show Business,” “Cheek To Cheek,” “Puttin’ On The Ritz,” “A Pretty Girl Is Like a Melody,” “Heat Wave,” “Oh! How I Hate To Get Up In The Morning,” “Easter Parade” and “Let’s Face The Music And Dance” to name just a few.

He was equally at home writing for Broadway and Hollywood. He wrote twenty complete scores for Broadway musicals including The Cocoanuts, As Thousands Cheer, Louisiana Purchase, This Is The Army, Miss Liberty, Mr. President, Call Me Madam and the phenomenally successful Annie Get Your Gun. Recent musicals culled from his screen work include Holiday Inn, Irving Berlin’s White Christmas and Top Hat (winner of the 2013 Laurence Olivier Award for Best New Musical.)

An intuitive business man, Irving Berlin was a co-founder of ASCAP (American Society of Composers, Authors and Publishers), founder of his own music publishing company, and with producer Sam Harris, builder of his own Broadway theatre, The Music Box.