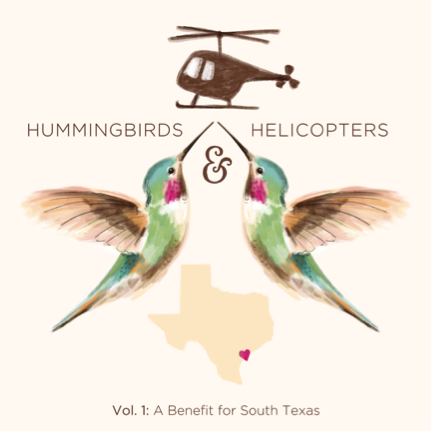 After hurricane Harvey dropped three square miles of water on Houston causing the worst flood in US history, of course all the airports were down. There was little air traffic, all of it helicopters. The only birds anyone saw for several days were the hungry hummingbirds, swarming around any feeders that were left in Harvey’s wake.

As Harvey took hold of the Houston area, Jolie Holland was in the air flying to Austin, before a tour with Samantha Parton in support of the record they were about to release. Holland is a native Houstonian, though it’s been years since she’s called the city home. She says, “It was a horrible feeling, that mix of helplessness, survivor guilt, and longing to be there to help. By the time the plane hit the ground in Austin, I’d thought of something I could do: a benefit record for the Gulf Coast. ”

The result is Hummingbirds & Helicopters Vol 1: A Benefit for South Texas, a beautifully curated homage to the musical culture and history of the Gulf Coast region. The album’s 11 tracks include Holland’s atmospheric, emotionally potent cover of Randy Newman’s “Louisiana 1927” (featuring Thor and Friends), a warm interpretation of Mickey Newbury’s “If You Ever Get to Houston” led by Bonnie ‘Prince’ Billy, Dean Ween’s cover of “Galveston” by Jimmy Webb (popularized by Glen Campbell), and Big Thief’s beautifully sparse version of Twain’s “High Tide”.

Personal ties to hurricane devastation run deep on the record, beyond Holland’s own connection to Houston. Dean Ween lost his home when hurricane Sandy hit the East Coast in 2012 and wasted no time in coming aboard the project, bringing in members of Steely Dan, Blood Sweat and Tears, and Smokey Robinson’s piano player to back him. While Holland rehearsed “Louisiana 1927” in Austin with Thor Harris (former percussionist for Swans), Harris split his time, making trips to Houston to help people with flood-damaged homes on the ground. Mastering engineer Garrett Haines of Treelady Studios in Pittsburgh has family in Houston still living in a hotel as of January, in the wake of the flood.

Album proceeds will be donated to the UN award-winning Schoolbox Project, a 501c3 non-profit that provides trauma-informed care for children rendered homeless or without access to education due to the deluge. As the Schoolbox Project’s work in Texas will soon wind down, additional funds raised will support continuing relief work in the hurricane-affected areas of the Gulf and Caribbean, including Puerto Rico. “I wanted to produce an album that would both give respect to the powerful musical culture of the gulf coast, and literally support some of the hardest-hit populations in the area,” says Holland.

As hurricane Harvey passed, Irma was straight on his heels. The Caribbean was hit, and Puerto Rico is still suffering. Holland isn’t content to stop here; Hummingbirds & Helicopters Vol 1: A Benefit for South Texas is the first volume in a series of disaster relief benefit albums Holland plans to release under the same name.