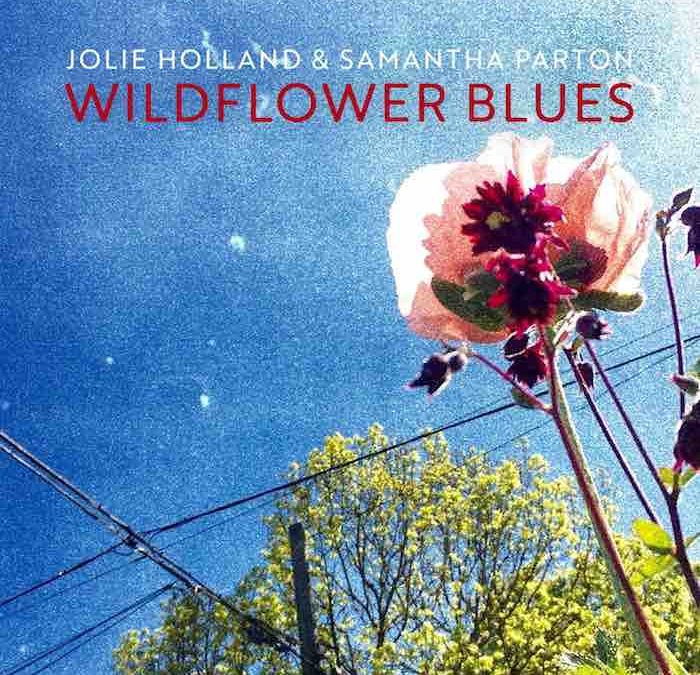 Wildflower Blues, the gorgeous new album by Jolie Holland and Samantha Parton, began with a phone call between two friends. The two hadn’t played together in years, but still shared a strong musical and personal connection. “I just called her out of the blue,” says Holland, who asked if Parton wanted to make some music together. “We hadn’t been in touch, but the timing was right and she said yes.”

Scheduled for release September 8 on the duo’s own label, Cinquefoil Records, the album wanders from rural blues to folk and ragtime, from smoky jazz to emotive R&B and fearless rock & roll. “I really like going at things from a lot of diverse angles,” says Holland. “The idea of genre is really unattractive to me.” In addition to seven originals, she and Parton cover Townes Van Zandt’s “You Are Not Needed Now” and Michael Hurley’s “Jocko’s Lament,” and Holland rewrites Dylan’s “Minstrel Boy,” adding verses about two poets—William Blake and Steven Jesse Bernstein—whose work “helped me crystallize my view of the world.”

Each has exerted a strong musical influence on the other. When they first met nearly twenty years ago on an East Vancouver street corner, the conversation inevitably turned to music. Very soon they co-founded The Be Good Tanyas, the popular, groundbreaking roots act that used traditional folk, country, and blues music to explore a range of different styles and sounds. Holland departed the group after only one album, but remained hopeful that she and Parton would collaborate in the future.

That “out of the blue” phone call turned out to be well timed for both musicians. Touring for Holland’s sixth solo album, 2014’s Wine Dark Sea, had wound down, and although she had songs for a follow-up, she was hesitant to re-embark on that promotional cycle. Parton, on the other hand, was still recovering from two serious car accidents that left her unable to play music and struggling to connect with her creativity. “I was in this wilderness of health problems,” she says, “and I hadn’t been able to do anything musically for three years. When Jolie called me up, I was so sick of lying on my back staring at the ceiling in a doctor’s office, that I was ready to say yes to anything, whether I could do it or not.”

When Parton felt stronger, they embarked on a low-key tour, as much to road test their new songs (and a handful of Townes Van Zandt and Velvet Underground covers) as to ease Parton back into the grind of sound checks, long drives, and late nights. Emboldened by the successful tour, they decamped to the Portland, Oregon, home studio of Mike Coykendall (Old Joe Clarks, M. Ward), and Holland assembled a small band of musicians to back them, including Stevie Weinstein-Foner (guitar), Jared Samuel, (piano, bass, guitar), and Justin Veloso (drums).

During that time they listened a lot to Nashville Skyline, Bob Dylan’s 1969 album, enjoying the looseness of that music, the sense of freedom and possibility. It became a kind of guide for Wildflower Blues, in spirit if not necessarily in sound. “One of the things about Nashville Skyline that feels so exciting to me is that it is a moment in time,” says Parton. “That’s what this new album feels like, too. It doesn’t feel be-labored.” “Honestly,” says Parton, “after the car accidents, I thought if I ever make an album again, it’ll have to be about recovery. But this album, aside from the title track, actually has very little to do thematically with any of that stuff. It’s like, just stepping back into the stream of music and seeing where it takes you.”

The stream will take them all over the world. In late 2017 and into 2018 the duo will tour throughout North America and Europe, performing songs that attest to the creative spirit that survives such physical setbacks and the friendship that thrives within the song and without. “The spirit of it is all about collaboration and friendship,” says Parton. “To me, more than even the songs themselves, it’s all about what went into this record—the history and the friendships and all the different roads that Jolie and I have traveled to end up making music together again. I think we know that is the beginning of more collaboration between us. I feel like this is our first album.”