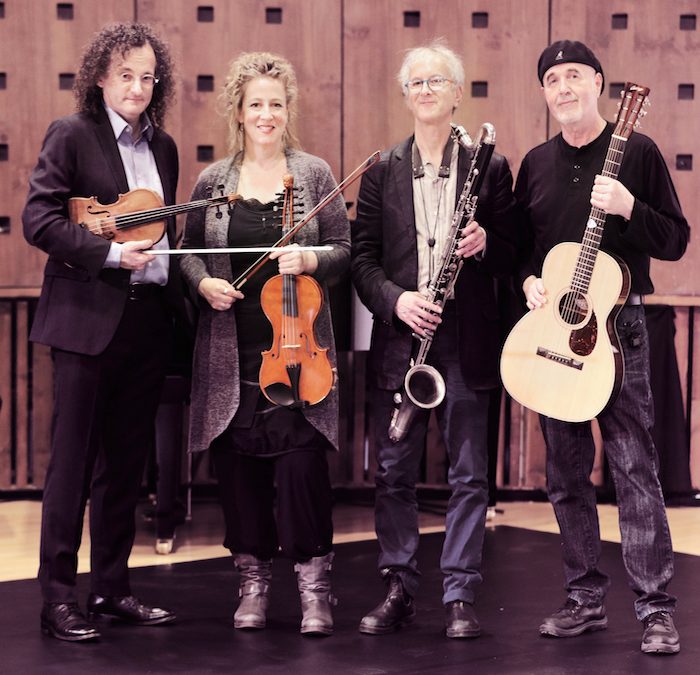 Beguiling new angles on the tradition. Yet another thought-provoking escapade to relish from Martin Hayes. – THE IRISH TIMES

The Martin Hayes Quartet, a new ensemble from one of Ireland’s foremost musicians, will release its debut CD The Blue Room in conjunction with their first American tour in October 2018. Kicking off October 11 at New York City’s Highline Ballroom, the tour will visit Chicago’s Old Town School of Folk Music, San Francisco’s Freight And Salvage and other notable U.S. venues along the way. (See below for full tour dates)

His new Martin Hayes Quartet is called “a highly resonant coming together” by the Irish Times. The group expands upon many of the musical ideas Martin has pursued in his renowned and longstanding partnership with guitarist Dennis Cahill. Their legendary explorations and arrangements of Irish music now push into new territory with the deep mellow sound of bass clarinet, played by the virtuosic Doug Wieselman (Laurie Anderson, Lou Reed, Antony & the Johnsons), and the warm tones of the viola played by the brilliant Liz Knowles (Bobby McFerrin, Bang-on-a-Can Orchestra, Riverdance). Cahill, a classically trained guitarist from Chicago, provides his groundbreaking Irish accompaniment.

“I love the chemistry we share as a group. Each performance is unique, spontaneous and buzzing with energy!” says Hayes. Born and raised in County Clare, Hayes began learning fiddle from his father at age seven. He is regarded as one of Ireland’s most influential traditional musicians, and is the founder of the award-winning band, The Gloaming.

The new album The Blue Room was recorded at Bantry House, a stately and historic 18th-century home on the edge of Bantry Bay, West Cork, as the quartet sat in a circle in the library with fires blazing at both ends of the room. Upon its European release the album garnered wide critical acclaim: “Absolutely essential listening when it comes to the very best of contemporary Irish music” (Arts Desk UK), “especially divine” (The Sunday Business Post), and “nothing short of revelatory” (Glasgow Life).

With a wealth of musical experience and exciting new ideas, The Martin Hayes Quartet is simultaneously ancient and contemporary, innovative and authentic.

Backstage and Live at the National Concert Hall (Dublin, 2017, 2 min)

(The American tour of the Martin Hayes Quartet is supported by Culture Ireland.)