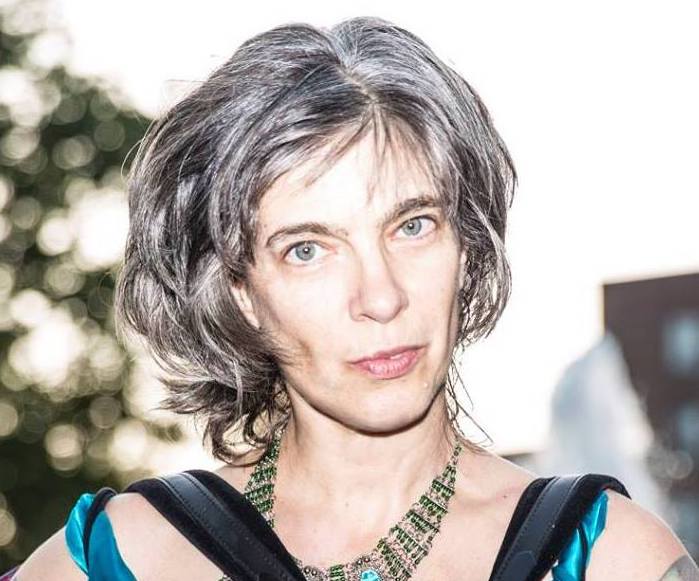 Album chronicles Garniez’ interpretations of songs written or made famous by a variety of dearly beloved artists, all recently departed

Garniez wanders through the genres of country, jazz and pop, leaving behind nothing but sweet wreckage. She has a richly compelling voice and a wild imagination
– THE NEW YORKER

Rachelle Garniez has been much admired as a singer, songwriter, and instrumentalist, a veteran of New York’s cabaret scene who has worked with everyone from Jack White to Taylor Mac. Her forthcoming album, Gone to Glory, chronicles her interpretation of songs written or made famous by a variety of dearly beloved artists, all recently departed.

The project began in 2016, a year which brought shocking and unexpected losses on many fronts. David Bowie, Prince, and Leonard Cohen had all died over the previous twelve months, and there was, alongside that immeasurable cultural bereavement, a national political climate of unrest and seemingly irreconcilable division. The original Farewell Party concert was conceived and performed at Pangea, New York CIty’s home to alternative cabaret performance. People were starved for the chance to mourn and celebrate, and the Farewell Party became an annual event. The resulting Gone to Glory collection is a covers album that’s also about recovering, an uplifting assertion that while death may wreck our world we still survive to enjoy all that’s been bequeathed.

With the depth of her talent and the breadth of her interests, Garniez’ vocal approach eloquently transfigures pop and rock, swing and soul – from the aforementioned Bowie, Prince, and Cohen, to Glen Campbell, Lemmy’s Motörhead, Aretha Franklin, Nancy Wilson, Della Reese, Sharon Jones, Mose Allison, and big band singer Bea Wain. With her masterful fluidity in full effect, she embodies the characters and inhabits the worlds. Equally at home in the incarnations of an adolescent hippie chick, a deeply troubled Viet Nam War veteran, a young Dutch WWII refugee, a heartless hipster, and a whole slew of romantics, Garniez simultaneously loses herself and finds a way to make the songs her own.

Garniez says she has largely eschewed covers in her career. But the opportunity to honor fallen heroes allowed her to branch out into exploring other lives and characters. She often avoids the most obvious songs – no “Hallelujah” for her Cohen, no “Purple Rain” for Prince – to find her own, more idiosyncratic choices. “A lot of it has to do with if I can look at the lyrics and imagine becoming a character, or even just being my own self and being able to sing these songs,” she says. “I need to feel that I’m connected to the lyrics, that I can really deliver them in a meaningful way.”

As to subject matter, the Gone to Glory songs range from the fantastically awful to the redeeming wonders of the everyday, tracing an emotionally affective arc from abject despair to accepting embrace. Death looms large, by turns comedic (“Killed by Death”), tragic (“Ruby (Don’t Take Your Love to Town)”), and documentary (“The Day Is Past and Gone”). Monsters are everywhere – specters of alienation (“Scary Monsters (And Super Creeps)”), self-delusion (“Rhinestone Cowboy”), PTSD (“My Sister and I”), and toxic patriotism (“Monsters of the Id”). But love is offered up as countervailing, manifesting multiform, from hopeless (“100 Days, 100 Nights”) to romantic (“Dont You Know” and “How Glad I Am’), from earthy (“Raspberry Beret”) to paradisal (“Day Dreaming”), from crushing innocence (“Frank Mills”) to universal experience (“Anthem”).

With the depth of her talent and breadth of her interests, Garniez’ vocal approach eloquently transfigures pop and rock, jazz and soul. With her masterful fluidity in full effect, she embodies the characters and inhabits the worlds. Garniez simultaneously loses herself and finds a way to make the songs her own.

Track listing for Gone To Glory: