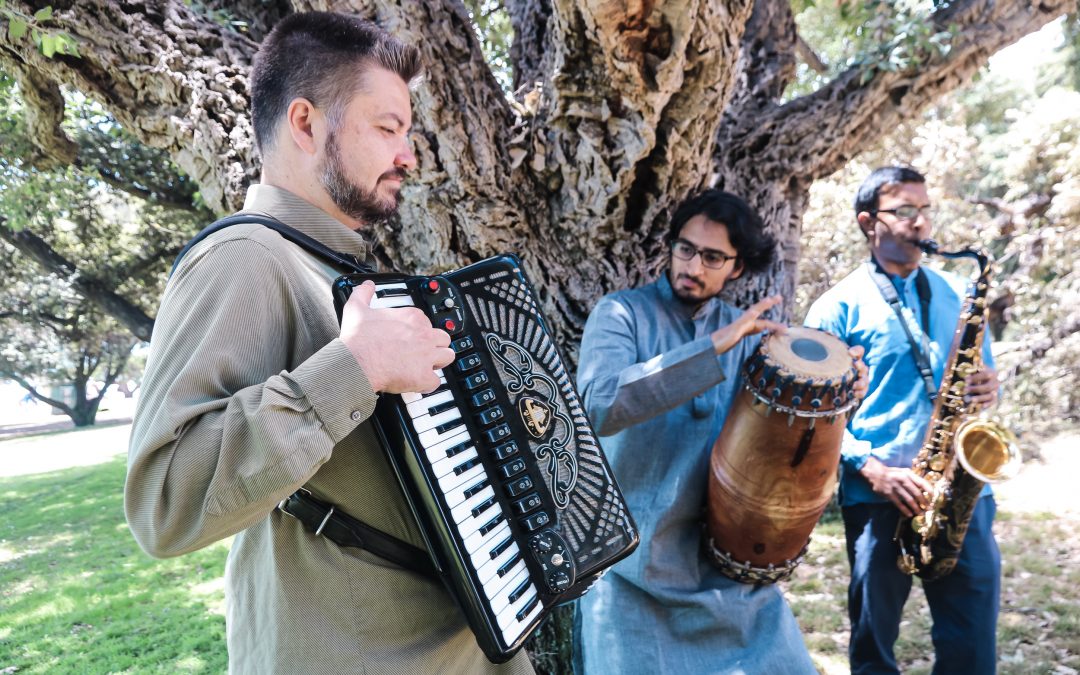 An album that draws upon the high-energy textures of Shakti and Mahavishnu Orchestra, Weather Report, Herbie Hancock’s Headhunter and Return to Forever. A Carnatic groove that is funky and driving.

When our ancestors speak of that delicate balance between tradition and innovation, they are hearing The Alaya Project, a sonic sanctum of crystalized soul! – Hafez Modirzadeh, Professor of Creative/World Music at San Francisco State University

The Alaya Project’s debut, self-titled, full-length album is the summation of three musicians’ long artistic journeys and the beginning of a profound next chapter. The group blends the Carnatic tradition of Indian classical music with contemporary styles of electric jazz, bebop and funk. It is confirmed for release on August 15, 2022.

Featuring award-winning drummer, percussionist and polymath Rohan Krishnamurthy, noted Carnatic saxophonist Prasant Radhakrishnan and Bay Area’s prized keyboardist and accordionist Colin Hogan, the Oakland-based band came together in 2017 to play the 50th Anniversary celebration of Sgt. Pepper’s Lonely Hearts Club Band at the U.C. Theater in Berkeley. While Krishnamurthy and Radhakrishnan had played Carnatic concerts together since high school, Hogan stepped in to complete the trio for the performance.

The three immediately recognized that the group’s Indo-jazz-funk fusion was worth exploring further. Both Krishnamurthy and Radhakrishnan followed the Carnatic tradition of studying under a guru from a young age despite growing up (respectively) in Kalamazoo, Michigan, and Phoenix. Their Chennai-based gurus famously performed together for years: Krishnamurthy studied with the mridangam maestro Guruvayur Dorai and Radhakrishnan with Kadri Gopalnath, the trendsetting artist who first adapted the saxophone to Carnatic music. They are now among the most prominent professional Carnatic musicians in the diaspora who push the music’s boundaries and bring the tradition to new audiences. Their fusion of traditional and modern, South Asian and American, is best summed up in The Alaya Project.

Part of a musical family that helped found one of the first Balinese gamelan orchestras in the United States, Hogan is a Berkeley native who learned African conga drumming and North Indian tabla from his father. All three bring a unique wealth of experience, knowledge and skill to the group.

Krishnamurthy founded the group and is the artistic director who composes many of the pieces and determines the setlist, but the music is a collaboration between friends.

“We know and respect each other so much personally and artistically, so that leads to a different level of artistic trust,” he explains. “I wrote many tunes with Prasant and Colin in mind and plan the sets to highlight their versatility and the range of styles we create. They are such special cross-musical artists, and I try to create structures of improvisation that inspire them to express their individual voices.”

The trio’s path is atypical of American groups, moving from their primary language in South Asian traditions to Western music forms, and the music reflects that perspective. The bandleader started his studies in third grade on the mridangam pitched hand drum, immersing himself in live concerts of Carnatic music and his parents’ vast record collection. Equally exposed to Western styles of music, he became interested in crossover sounds in high school. Further exploration of jazz and experimental styles led to pioneers of progressive Indian fusions like Shakti (he toured the U.S. this spring with one of the band’s legendary founders, violinist L. Shankar), Zakir Hussain, Trilok Gurtu, and earlier collaborations with Ravi Shankar and The Beatles.

Radhakrishnan’s roots in Carnatic music are equally deep, listening to traditional Indian instruments like flute, vina and vocal music, and applying it to tenor saxophone. As a saxophonist rooted in jazz traditions, he spent time transcribing Sonny Rollins and Hank Mobley while absorbing the ethos of John Coltrane and Cannonball Adderley.

“We sort of lived it,” explains Krishnamurthy. “We didn’t really have a choice that we would bridge the Carnatic tradition with jazz and funk. There was never a moment when I thought that I needed to create this fusion. It just happened naturally. As an Indian American and product of two cultures, I’ve had to work hard to embrace my duality and tell stories that exist within the hyphen. I think we’re finally at a place in our society where the pursuit of self-discovery, lineage, and authenticity are paramount. The next generation of artists are elevating counter-narratives and redefining normalcy on their own terms.”

“In a way, rhythm is the oldest universal language, traversing country, culture, and creed. Growing up as a third culture kid in a small Midwestern town, it was always about finding ways to transcreate Indian classical art in a culturally relevant way for new audiences. Nothing could bridge those cultural chasms in such an elemental way like rhythm.”

The Alaya Project’s base is Carnatic music and it branches out from there, drawing upon the high-energy textures of Shakti and Mahavishnu Orchestra, Weather Report, Herbie Hancock’s Headhunter and Return to Forever. The sound is rooted in a Carnatic groove that is funky and driving. There’s a lot of complexity and rhythmic patterns, but there is a feel of funk even when the meters are in five, seven, or nine.

Despite the smaller instrumentation of a trio (with guests), the group goes in many directions thanks to the members’ influences, training and life experiences. The group is more polylingual than bilingual, with each member playing the role of at least two musicians.

This all comes to the fore on the group’s debut studio recording. Primarily a live recording, the trio cut all the tracks during a marathon one-day session with recording engineer Neil Godbole at Airship Laboratories in the Bay. Multiple takes explored different facets of the songs, but there was virtually no need for retakes or overdubs. These were pieces performed many times for concerts in the pre-pandemic days of 2019.

Working and emerging from isolation is now a common COVID era story for musicians, but the session took strategic planning and felt like a gift when it finally happened in 2021. That day in the studio was a celebration, a coming together to create this album, and also symbolically a gesture to move forward from the terror of the pandemic. It’s now time to share the fruits of that joyous session.