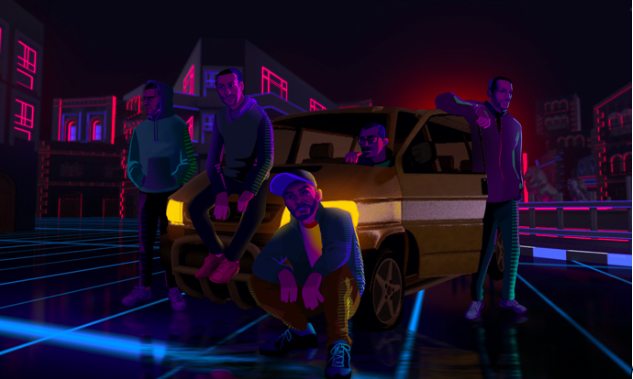 Originally formed in Jordan and with members now scattered between Palestine, London and the USA, 47SOUL have pioneered a unique style that they call Shamstep, in which hip hop and electronica are fused with Middle Eastern-influenced melodies and styles. These include Shaabi, traditional dabke dance and the pop music of Levant.

The collective, formed of Tareq, Ramzy Suleiman and Walaa Sbait, have toured the world since releasing their debut album ‘Balfron Promise’ two years ago, building up an impressive following across the Middle East and the global Arab diaspora. In 2019, they performed for NPR’s Tiny Desk Concert, KEXP session and Youtube Dubai Space during a stint of over 160 live shows internationally.

Their upcoming second album Semitics, mixes stomping, no compromise dance music with powerful new songs and challenging, thoughtful lyrics in both Arabic and English. The album was recorded in London and includes a cast of London-based artists from around the world; from the German-Chilean MC Fedzilla to the British-Iraqi rapper Lowkey and British Palestinian rapper and singer Shadia Mansour. It also features musicians based in the Middle East including two of the best-known Palestinian rappers; the Jordan-based The Synaptik represents the “new school”, while hip hop veterans are represented by Tamer Nafar, who was one of the founders of the massively-influential DAM. The first track ‘Dabke System’ comes with a compelling video that is a dedication from 47SOUL to the Dabke dancers of the world.