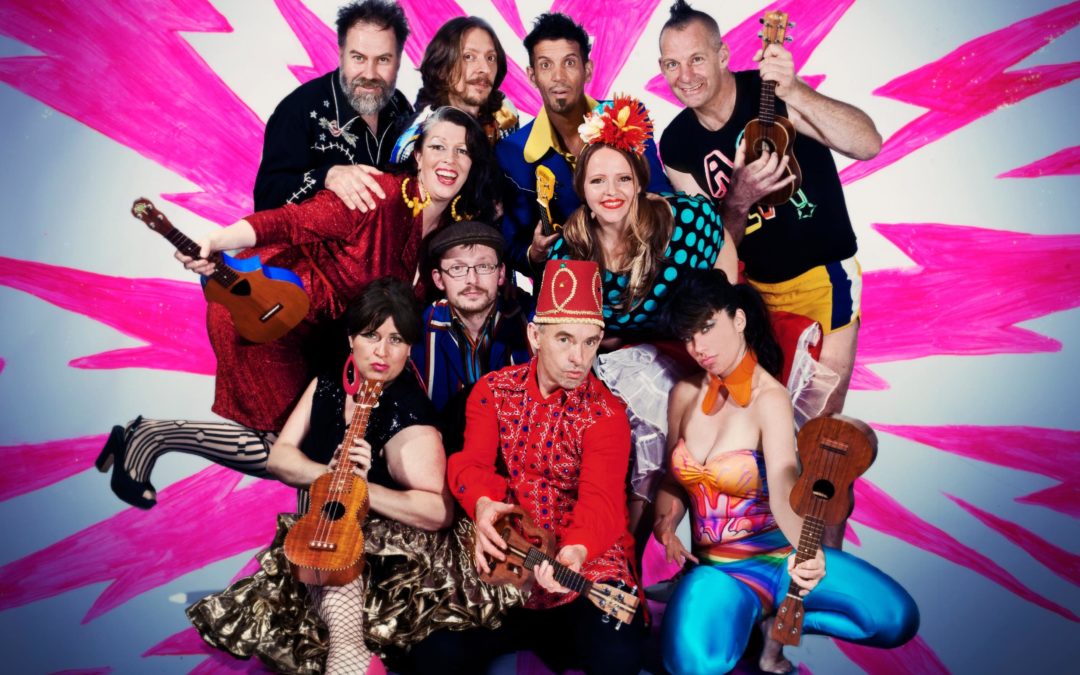 Tour Preview Video Here
Band Combines Sublime Musicality With Humorous Kiwi Charm
When they burst into song, their sweet sounds can silence an audience in a second and bring a crowd of thousands to their feet. – SPRINGFIELD REPUBLICAN

The Wellington International Ukulele Orchestra has confirmed a 2016 US tour that will see the adventurous ensemble play over 40 American cities throughout the winter and spring. Hailing from New Zealand and sharing musical DNA with Flight Of The Conchords, The Wellington International Ukulele Orchestra has become a fan favorite worldwide for their winning combination of charming humor, high-octane solos and heavenly vocal harmonies.

The band’s eclectically curated repertoire consists of songs from many genres alongside traditional tunes from the South Pacific and has garnered them raves for performing “ukulele-fied” versions of rock and pop classics by the likes of Justin Timberlake, Dolly Parton, Cyndi Lauper, Blondie, Salt n Pepa and many more.

The Wellington International Ukulele Orchestra was founded in December 2005 when award-winning musician Age Pryor (Fly My Pretties, the Woolshed Sessions) and Bret McKenzie (Flight of the Conchords) began performing in their tiny local café in Wellington, New Zealand. Word spread of their shows and within a few months, a dozen friends from Wellington’s tightknit musical community joined for regular early morning sessions.

The Wellington International Ukulele Orchestra have toured the USA, China, Japan, the United Kingdom, and headlined major arts festivals across New Zealand and Australia. The versatile musicians have released 4 EPs and a full-length album, which debuted in the NZ Top 10 and topped the NZ Indie Music chart. They have performed on film, television and commercial soundtracks, and collaborated with many of the greats of Kiwi music. They’re a festival favorite and have become a mainstay of the 21st Century ukulele revival.